How to Make the Perfect Eggnog 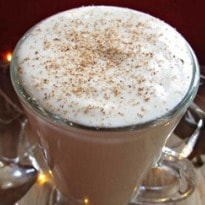 Is Christmas not Christmas without eggnog, or do you prefer mulled wine - or another festive tipple entirely? Which spirits and spices do you use, and does anyone serve eggnog warm?

Victory is mine - after five years of begging, this Christmas I've finally been let loose on the eggnog by my doubting editor. She reckons it's the kind of thing your granny might spring from the nautical drinks cabinet during the Queen's speech, but for me, eggnog is as much a part of the all-American holiday season as candy canes and Bing Crosby. And, though mulled cider will always have a special festive place in my heart, I want in on this party too.

Of course, having waxed lyrical to her about Clark Griswold and the Rockefeller tree, I promptly discovered that eggnog, like so many alcohol-related crimes, is actually British in origin. Though it first pops up in late 18th-century Philadelphia, the drink bears a striking resemblance to Falstaff's sack posset, a warm mixture of milk, sugar, egg yolks and strong, sweet wine, which surely makes its revival our patriotic duty. After all, a nation can't live on mulled stuff alone.

Let's be honest, this is the most important aspect of the entire operation. Sweeter brown spirits seem to be the base for many recipes, with America's other first lady, Martha Stewart, plumping for bourbon, dark rum and cognac; cocktail supremo Dale DeGroff goes for bourbon and spiced rum; Tiki-Tiki bar magnate Trader Vic suggests brandy and rum in his Baltimore eggnog; food writer Tim Mazurek uses dark rum and brandy, and Michael Ruhlman's new book Eggs keeps the field wide open with a choice of bourbon, whisky or brandy.

I find the whisky, in particular, too strong and assertive in this context. The sweeter bourbons and rums do better, but they still have the potential to overpower what I've always imagined should be a gentle hug of drink - I actually have to dilute Ruhlman's with milk so it doesn't knock me out. (Stewart's, by contrast, is so disappointingly family-friendly, I'm tempted to serve it with a chaser of rum.)

Tim Halket, the author of a neat little book of chicken and egg recipes called Five Fat Hens, uses dark cream sherry, which makes for an agreeably mellow "alcoholic milkshake", as he puts it. In a similar vein, Trader Vic adds madeira to his brandy and rum. Combining spirits with fortified wine, as he suggests, gives you the best of both worlds: the former fiery and warming, the latter adding curranty, spicy, festive flavours. I like the sweetness of bourbon or rum (bourbon seems more American; rum possibly more traditional) with either cream sherry or madeira, depending on what you'd prefer to polish off over the next couple of weeks.

Adding some spice at this point makes things more interesting. DeGroff deploys ready-spiced rum, while Mazurek flavours his own with nutmeg, which works better; the bought variety tends to be heavy on the vanilla. It does mean thinking a few hours ahead, but you could always make an entire bottle of the stuff for future use.

The egg aspect is less straightforward. The simplest recipe, from Trader Vic, simply sticks a whole egg in a cocktail shaker with the other ingredients and shakes the hell out of it. Halket and Stewart use the yolk only, and Rulhman, Mazurek and DeGroff include yolk and white, but beaten separately with sugar, so the whites form an uncooked meringue that can be folded into the rest of the mixture just before serving. Stewart takes the prize for the most time-consuming process; she makes an egg yolk custard on the hob, simmering it slowly until it thickens.

Trader Vic and Halket's quick recipes slip down almost as fast as I can make them - lighter than the rest, they froth briefly straight from the shaker, but Halket's milkshake description is a fairly accurate one. At the other end of the spectrum, Stewart's version is so rich and thick it would be better served over the Christmas pudding than in a glass.

The separated egg varieties prove the most popular; rich and creamy, but lightened by the meringue, they look and feel pleasantly festive - too thick to glug, but not too heavy to finish.

The other thing that determines the lightness, or otherwise, of the drink is the dairy content. It ranges from Mazurek's double cream and condensed milk (who notes that "you can make it with either heavy [double] cream or half and half [a US blend of milk and whipping cream], depending on how decadent you're feeling -- I always vote for the heavy cream, since it is the holidays, after all") to Trader Vic's milk-based version.

Halket and Stewart use a mixture of milk and double cream, Ruhlman goes for single cream only, while DeGroff credits the success of his Uncle Angelo's prize-winning recipe to its lightness, thanks to the inclusion of "twice as much milk as cream".

As previously mentioned, Stewart's eggnog is almost absurdly rich, while Trader Vic's thin, milky version doesn't feel quite as festive as the rest. I don't think the sweetness of the condensed milk is necessary here, but I do like the idea of cream, as it's Christmas. Single will do just fine - use double and you'll struggle to finish the glass.

Everyone uses white sugar or sugar syrup, and after experimenting with the soft brown stuff for flavour purposes, I see why - in place of a pretty primrose yellow drink, I get a muddy beige beverage that doesn't exactly sell itself in the glass. Ordinary caster works just fine.

Nutmeg is the only spice you need here, to my great joy (it is definitely in my top five, since you asked). Stewart infuses her custard with a vanilla pod and Mazurek pops some vanilla essence into the finished drink, but I don't think it adds anything.

Ruhlman gives a recipe for an aged eggnog which he reckons you could probably age for five years "before it started to taste more funky than is pleasurable". Sadly, I didn't have enough time to give it a try, but I'd like to - so if anyone wants to lay some down for next Christmas, here is the recipe.

Until then, this is my gift to you.

1 nutmeg, plus a little extra for serving

Twelve hours or so before you want to drink the eggnog, smash the nutmeg into several large pieces using a pestle and mortar and add to the bourbon. Cover and leave to infuse.

Separate the eggs into two medium bowls. Whisk half the sugar into the yolks until they have thickened and lightened in colour. Whisk in the bourbon or rum, sherry or madeira, and cream. (You can make it up to this point a day ahead if necessary. Cover, refrigerate, then simply give it a good whisk before proceeding.)

Whisk the egg whites until they form very loose peaks, then gradually whisk in the remaining sugar until they form soft peaks. Fold this gently into the eggnog and taste before dividing between glasses. Grate a little more nutmeg over the top of each glass before serving.

Is Christmas not Christmas without eggnog, or do you think this is one drink we were wise to give up? Which other festive punches would you recommend to infuse the party with Christmas spirit? And lastly, can anyone tell me if eggnog, like mulled wine, is ever served warm, rather than chilled?