How to make the perfect malt loaf 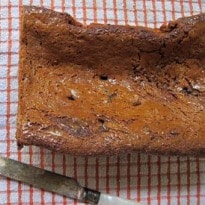 Do you eat your malt loaf plain, topped with cheese, loaded with butter or, heretically, toasted? And what other malty recipes float your boat?

If you thought last week's beans on toast were a peculiarly British fetish, then malt loaf makes that sweet, gloopy orange sauce look positively international - even Ulster's Veda loaf isn't quite the same. Whether it is a food that you have to inhale with your mother's milk to develop a taste for is something that, as a lifetime devotee, I'm not qualified to judge, but I find it difficult to believe that anyone could resist its sweet, squidgy, oddly chewy charms.

Though it's sold as a bread, it's definitely more in the cake category - the loaf bit is just there to justify the application of great wodges of salty butter, which is less of a serving suggestion and more of a three-line whip in my book. In recent years the market leader, Soreen (even the name carries a whiff of the 50s), has marketed it as a recovery food for athletes, and introduced pre-sliced snack packs that lack both the glorious stickiness of the original and the requisite amounts of butter. But no one's fooled. We all know the proper place for malt loaf is four o'clock on a dull afternoon, accompanied by a large mug of tea, and the only correct helping is one slice too many. They do squash so small when they're cut, after all.

But, despite my fondness, it's never occurred to me until now to try making my own. Is it possible to improve upon perfection?

The flour and raising agents

First things first. Traditional malt loaf is not light and airy, like most bread. It is squidgy and moist, more like a cake, so strong bread flour, with its high gluten content, seems slightly counterproductive. Yeast, too - baking powder should give a softer, more delicate result, as well as cutting out the lengthy rising process. Soreen uses a mixture of "wheat flour" and malted barley flour, the latter available from specialist websites, which it suggests gives "improved rise, softer crumb and more crust colour". As it only makes up 5% of the total, and I'm not interested in either rise or crust colour, there doesn't seem to be much point investing. I suspect, as wholemeal flour isn't mentioned on the Soreen packet, that they use white. Though this is a departure from the standard, I'm going to use a mixture, because I like the slightly nubbly texture that Rhodes' wholemeal and Lepard's spelt gives their breads. Do feel free to just use plain if you prefer.

Malt extract, a byproduct of the brewing industry and a favoured elixir of postwar mothers, is mandatory. Hollywood sticks in a scanty three tablespoons to Leiths' whopping 115g of the stuff. I reckon the more the better; not only does malt make everything pleasingly sticky, but it should be the principal flavour here. That said, Rhodes uses no other sweetener, and I find his loaf too plain. Lepard's golden syrup is good, but Leiths' soft brown sugar and treacle gives the best flavour: a really well-rounded, rich sweetness which wins it fans despite the loaf's inauthentically cakey texture.

Hollywood and Leiths use melted butter in their loaves, and Lepard goes for lard instead. Rhodes uses an egg, while NZEllie's recipe is fat-free, and remarkably good for it. Though it goes against every culinary principle I hold dear, given the amount of butter I'm planning to stick on top, this seems just about acceptable.

Hollywood uses water to moisten his dough, which explains why his loaf tastes so muscularly plain (though, that said, Soreen also contains a good deal of water). Lepard goes for dark ale or whisky - I try the former, which works well with the flavours of the malt, but makes things a bit too savoury for my liking. Leiths uses milk, which explains the soft, cakey texture, and Rhodes and NZEllie go for strong tea, which works well, and seems appropriate here, somehow. Tea and malt loaf go together like, well, beans and toast.

Though I could have sworn blind that malt loaf was a fruit-free zone, I obviously haven't been paying attention, because it contains raisins, and in some quantity. Heresy it may be, but I find I prefer Lepard's chopped prunes with the other flavours - even Hollywood's sultanas seem juicier and more interesting, but use whatever dried fruit tickles your fancy. Whatever you go for, take a leaf from NZEllie's book and soak it in the tea for 15 minutes before use to plump it up deliciously.

Lepard and Rhodes use mixed spice in their malt loaves. I love sweet spice, but I don't think it adds much here; I'd prefer to let the malt and dark, treacley sugars stand alone.

Glazing it with honey (Hollywood) or malt extract (NZEllie) gives the top an attractive gloss, but the real difference comes with age. Difficult as it may be to resist, malt loaf gets better the longer you leave it; as Rhodes observes, "this is a loaf that needs to mature to reach the moist texture we all know exists". He and NZEllie counsel leaving it for three to four days, and certainly a couple of days, if it is tightly wrapped, will develop the loaf's characteristic stickiness. Restraint is everything. It's worth the wait, I promise.

Stir together the malt extract, treacle, sugar and tea, then add the dried fruit. Leave to soak for 15 minutes. Line a 10x20cm loaf tin with paper and heat the oven to 180C/350F/gas mark four.

Whisk together the flours, baking powder and salt, then stir into the mixture to make a soft batter. Spoon into the tin and bake for about an hour, until a skewer comes out cleanish (the top will bow, don't worry!).

Paint the top with malt extract and leave to cool in the tin. Wrap in baking paper once cool, and put in an airtight container for two to three days before eating. Or, at least, try.

Malt loaf: love it or loathe it? (Does anyone truly loathe it?) Do you like it puritan plain, heretically toasted, topped with cheese or loaded high with slabs of cold, salty butter? And which other malty recipes float your boat?