How To Make The Perfect Meatloaf 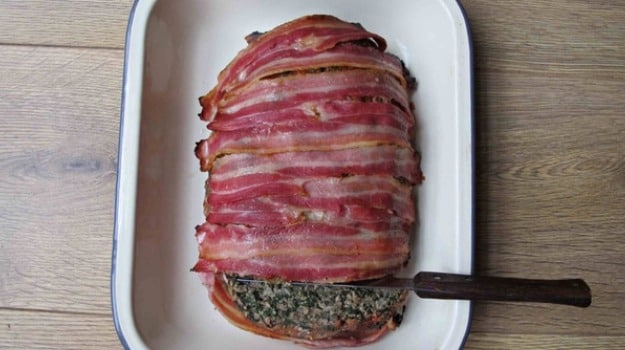 Make your meat go further with this classic US comfort food recipe. But which meat do you prefer to use?

For those of us of a certain age, the word “meatloaf” will for ever be associated with disappointing discos; at 13 I would have done anything for love, up to and including the mysterious “that”, had the opportunity only arisen. But before those trembling vocals tattooed themselves on my eardrums for life, I knew of meatloaf only from the world of the Hardy Boys and Nancy Drew, where it was something strange and exotic, like the equally puzzling popsicle, or the bizarre-sounding jelly sandwich.

Of course, meatloaf is just the American name for a very old idea, a way of stretching those expensive scraps of meat a little further by binding them with other ingredients, as in the Middle Eastern kofte, Germanic frikadellen, or indeed, our very own faggots. But for some reason, while by no means unknown in the UK, the loaf has never been as popular here as across the pond. Meatloaf is the quintessential taste of home for many Americans; like shepherd’s pie, its attraction lies in its familiarity. As Richard Ehrlich wrote in this paper: “In the US, meatloaf is a religion that unites people of all denominations, including atheism.”

It’s not fancy, but it is economical to make, and, I can assure you that having finally tasted it, very satisfying to eat. As no doubt Meat Loaf himself would attest.

As befits the cowboy nation (Americans eat 25kg a year each, compared to our 18kg), meatloaf tends to involve beef, though not exclusively – the only recipe I find calling for beef alone is one from a modest little booklet by one Mrs Ida Lapp entitled Delicious Country Style Cooking with Memories of Home some friends brought me back from an Amish market. It calls for “ground hamburger” which, after some investigation online, I determine is “ground from less tender and/or less popular cuts of beef”, for which I substitute some very competitively priced fatty mince.

The classic American cookbook The Joy of Cooking, first published in 1931, uses a combination of minced beef and bacon in the recipe I try out, while of the two I select from the Essential New York Times Cookbook, one suggests using beef and sausagemeat, and one “ground veal, pork, beef or a combination of all three”. This last option is what America’s Test Kitchen recommends, concluding that “meat markets haven’t been selling meatloaf mix (a mix of beef, pork and veal, usually in equal proportions of all of these) for nothing … the best meatloaves were made from the combination of these three meats”.

Like them, I found beef alone rather dull – protein for protein’s sake, with a chewy toughness. Adding bacon improved the flavour, but minced pork and veal did more to loosen the texture, though as veal mince is expensive, and its mild, almost milky flavour is easily lost here, I’m going to use a mixture of beef and pork. Sausagemeat also works well if you don’t mind handing over some control over the seasoning and texture to someone else.

Sausagemeat already has its complement of filler, of course; usually rusk, whereas I prefer to add my own. Mrs Lapp specifies, somewhat confusingly, 100% All-Bran cereal, which I decide probably means the wheat bran powder available from health food shops, rather than the sweetened bran stick cereal of the same name. Nathan Lump, whose meat and spinach loaf recipe was published in the New York Times in 1974, suggests fresh breadcrumbs; Oliver Clark, whose recipe graced the same pages 26 years later, the dry variety; and the Joy of Cooking and America’s Test Kitchen add rolled oats and saltine cracker crumbs to the mix. The bran has too strong a flavour of its own, and its nubbly texture gives the distinct impression of dining on an old hessian sack (sorry Mrs Lapp). Dry breadcrumbs, oats and crackers yield far more satisfactory results, but they all lack the softness of the fresh kind. Once these have soaked up the meat juices, they almost dissolve on the tongue, giving the finished dish a surprisingly light texture.

Onions are a must – America’s Test Kitchen says it cooks them first because as “the meatloaf cooks to an internal temperature of just 160F [71C], raw onions never fully cook”, though they do soften sufficiently for me not to notice any crunchy, pungent chunks in Lapp and the Joy of Cooking’s versions. Sauteeing them first undoubtedly improves their flavour, however.

Garlic, as used by Clark, Lump and America’s Test Kitchen is always a pleasure, though I’m less keen on Lump’s pureed celery, which adds a faintly bitter undertone. But it’s Lump’s spinach that proves the revelation: as Ehrlich says, a good meatloaf includes “plenty of vegetable matter … which loosens the texture by breaking up the density of the meat and adding flavour and additional moisture”. The spinach not only tastes good, and makes the finished loaf look considerably more attractive, but it improves the consistency of the entire dish, keeping it both moist and relatively light.

The grated carrot the Joy of Cooking suggests as an optional extra has much the same effect, and I love the distinctive flavour of the green pepper that Clark includes, though not all my testers are so keen. His portobello mushrooms similarly fail to thrill me, but I think the specifics here are less important than the basic principle of cutting the meat with vegetables. To that end, use whatever kind you like, whether it’s peas, sauteed parsnips or blanched kale.

Eggs are the standard binder in a meat loaf. Lapp thriftily loosens the mixture further with water, but I prefer the softening effect of dairy – Lump’s milk works well, but America’s Test Kitchen’s tangy yoghurt is even better. Clark goes for whipped cream cheese and mayonnaise, which, in conjunction with the sausagemeat and grated Parmesan, makes his meatloaf almost too rich for my taste; this should be a dish that’s plain enough to eat a hefty slice of.

That said, mince is pretty plain fare on its own, and this is a dish that demands a generous hand with the seasoning. It’s pretty much a blank canvas for other flavours, and though I suspect suggestions such as red wine, blue cheese or truffles risk overwhelming the meat, I would staunchly defend your constitutional right to give them a try.

Tomato ketchup and chilli sauce are popular additions to meatloaf for much the same reason as they’re popular accompaniments; the strong, tangy flavours are the perfect contrast to the savoury meat. I’m not particularly keen on the sweetness of the ketchup, which works much better as a glaze (of which more later), but I do quite like the heat of the chilli and the sourer warmth of dijon mustard.

I’d also recommend the grated horseradish suggested by the Joy of Cooking depending on what else you’re sticking in, while a dash of Worcestershire sauce, as used by Mrs Lapp and America’s Test Kitchen, injects a welcome savoury note. These are all tried and tested flavour combinations with beef; basically, if you like something on a hamburger, there’s a good chance it will work here as well.

Because I’m using Lump’s spinach, I’m going to steal his seasoning too – sweet, peppery nutmeg works beautifully with both green leafy vegetables and mild pork, but should you not share my enthusiasm for that spice (and I know some regular readers emphatically do not), feel free to make substitutions. As Clark’s onion power and Cajun seasoning and America’s Test Kitchen’s thyme and parsley suggests, the meatloaf is a very flexible beast.

The glaze and cooking

Though not absolutely essential, a sweet, tangy ketchup glaze makes a surprisingly addictive finish to the meatloaf. So, however, does, crispy bacon. Two proudly all-American toppings – how to choose between them?

Fortunately, America’s Test Kitchen has come up with a way to incorporate both, brushing on half the glaze before adding the bacon, and serving the rest as a sauce. I miss the crunchy top that Lapp’s meatloaf develops, however, so I’ll be adding my bacon halfway through cooking, as Clark suggests, for the best of both worlds. If you’re not a bacon fan, then rolling the glazed loaf in dry bread or cracker crumbs, as the Joy of Cooking recommends, helps give it a decent crust (though basting it with stock, as it goes on to recommend, does exactly the opposite).

Despite the name, you’re better off baking your meatloaf free-form rather than in a loaf pan, where it tends to boil in its own juices. Rest before eating for the best flavour. Also surprisingly good in a sandwich the next day.

Heat the oil in a frying pan over a medium heat and add the onion. Fry for about five minutes until softened, then add the garlic. Cook, stirring regularly, for another couple of minutes, then set aside.

Heat the oven to 180C and line a rimmed baking dish with foil. Wash the spinach well, then put in a large, lidded pan over a medium heat, cover and cook, shaking the pan occasionally until it has wilted – this should only take a couple of minutes. Drain, rinse under cold water and squeeze out as thoroughly as you can. Roughly chop. Mix together the ketchup, sugar and vinegar in a bowl.

Put the minced meats in a large mixing bowl with the breadcrumbs and onion, but don’t wash the onion pan yet. Whisk together the eggs, yoghurt or milk and seasonings, plus a generous amount of pepper, then combine with the meat using a fork or your hands. Put the onion pan on the heat, grease lightly, and fry a little of the mixture to check the seasoning, adjusting if necessary.

Lift the mixture on to your baking sheet and shape into a loaf (wet hands are the best tool for this). Brush with the ketchup glaze, then bake for 30 minutes.

Remove from the oven and arrange the bacon rashers over the top, overlapping, tucking the edges underneath the loaf. Bake for around another 30 minutes (the internal temperature should reach 70C), then allow to cool for 20 minutes before slicing and serving.

Meatloaf: did you grow up on it, and if so, are they happy childhood memories, or have you avoided the stuff ever since? What’s the secret ingredient to meatloaf perfection, and what exotic spin would you recommend?