How to make the perfect pecan pie 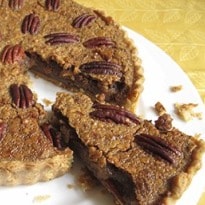 Pecan pie - southern gem or pretender to the pumpkin's crown? What desserts will you be whipping up in honour of Thanksgiving?

This week, in honour of Thanksgiving, I've finally been let loose on one of my favourite American desserts. Despite its heavenly combination of rich nuttiness and caramel sweetness, as a speciality of the south, pecan pie wouldn't have featured on the first Thanksgiving table. In fact, it didn't put in an appearance until the late 19th century.

To be honest, even if they had come across trees bursting with nuts, I doubt the pilgrims would have approved of such wanton indulgence - ancient loyalties aside, let's be honest here folks: a buttery, nutty sugar pie is a much easier sell than anything made out of pumpkin. So, if you've never got on with the classic squash-based number, and even if you're not intending to go the whole hog with candied sweet potatoes and a bourbon noodle kugel (well, Thanksgivukkah only comes once every 70,000 years), it's a great excuse to make a proper pecan pie.

Every good pie starts with good pastry - but where pecan's concerned, there's little agreement as to what that is. Southern Living magazine specifies 'refrigerated piecrusts' which seems to mean ready-made shortcrust pastry, sprinkled with icing sugar in what one online commenter described as "a clever way to make it taste homemade". Tamasin Day-Lewis makes a plain shortcrust in All You Can Eat, America's Test Kitchen's New Best Recipes goes for a sweet one, Jamie Oliver flavours his with orange zest and vanilla in Jamie's America, Annie Bell enriches hers with egg and suggests using spelt flour as "its character works well with the pecan filling" in her Baking Bible, and the Essential New York Times Cookbook proposes a cream cheese pastry on the basis that "you want a pastry that is firm and buttery but not too sweet, because the pecan filling is intensely sweet".

I like the rich crumbliness and complementary nuttiness of Bell's pastry, but in the end I agree with the New York Times: the savouriness of their crust, like that of Day-Lewis', is a great foil for the treacley filling, while the crunch is the perfect contrast to its gooey richness. However, like Southern Living the Times doesn't blind bake the shell before adding the filling, which I think is a mistake: though the sides are crisp, the bottom stays doughy and raw in both cases. This is not a dish that deserves to be rushed.

If the proper pastry is contentious, then the best way to fill it is an even stickier subject. Broadly speaking, the inside of a pecan pie is a kind of custard made from eggs, melted butter and some variety of sugar - but there's little agreement beyond that.

Corn syrup is often used in the States, and I go to some trouble to get hold of the dark stuff for the New York Times recipe, only to be underwhelmed by the results. It tastes faintly like thin treacle. Oliver suggests using molasses instead, but I find the flavour too strong; pecan pie should taste caramelised, rather than bitter. Bell, meanwhile, goes for golden syrup, which, along with her lemon zest and juice, makes her pie taste more like a British treacle tart. Day-Lewis uses dark muscovado, which gives her filling a more subtle toffee-ish flavour.

More striking than the taste, however, is the texture of Day-Lewis' tart: where many of the others have a slightly jellied consistency, hers is velvety smooth, like a silky set custard. I put this down to both the cream she uses and the cooking process: she heats the filling over a bain marie with a little cornflour until it thickens. This seems to stabilise it, which makes it much quicker to bake and negates the danger of it curdling in the oven like the Southern Living pie (which is so revolting I have to throw it away).

After making the maple-syrup version of the Cooks Illustrated pie I'm torn - the flavour seems so quintessentially American (if not southern) that I'd love to include it, but the texture of Day-Lewis' tart is undeniably superior. In the end, I decide to combine the two, substituting maple syrup for half the sugar, and cutting the amount of cream to keep it fairly thick.

There's no need for much more than nut and sugar here: Oliver's cinnamon and Day-Lewis, Cook's Illustrated and the New York Times' vanilla all seem unnecessary, as does Bell's lemon zest. However, I do like the idea of nodding to another great American tradition with a little strong liquor; the Times and Joy of Cooking use dark rum, while Oliver and Southern Living suggest bourbon. Far more Southern, and a great excuse to invest in a bottle.

Last but not least, the pecans themselves. Toasting them before use - as the New York Times and Cooks Illustrated recommend - really brings out the flavour; definitely an extra step worth taking. The latter also recommends using chopped nuts, on the basis they're much "easier to slice through and eat". Day-Lewis and the Joy of Cooking both use whole nuts, and everyone else goes for a combination of the two; much the best option as far as I'm concerned. Chopped nuts add body and that all-important nuttiness to every bite, while those on top both look pretty and toast further in the oven, adding an even more intense burst of pecan flavour.

This is a dessert that should be all about the nuts: allow to cool, then serve with a scoop of ice cream (buttermilk would be good), or (however un-American) a dollop of creme fraiche for contrast.

To make the pastry, mix the flour with the salt. Add the cream cheese and rub in, or pulse briefly in the food processor to combine, then cut the butter into 2cm chunks and rub in or pulse until it's the size of a garden pea. Stir in the water and vinegar and pulse or rub in until the butter is the size of small petits pois.

Tip into a bag and knead until it comes together into a dough and feels slightly elastic. Form into a disc and chill for 45 minutes or up to 12 hours.

Grease a 23cm loose-based tart tin and roll out the pastry on a lightly floured surface to about 5mm thick. Use to line the tin, then chill for 30 minutes.

Meanwhile, heat the oven to 180C. Tip the pecans on to a lined baking tray and bake for about 6 minutes until toasted. Allow to cool slightly, then roughly crush half of them.

Prick the pastry base several times with a fork, line with foil and fill with baking beans, rice or dried pulses. Bake for 15 minutes, then remove the foil and beans and bake for another 6 minutes until golden.

Meanwhile, put the sugar, syrup, butter and cream into a heatproof bowl set over a pan of simmering water and stir together until it melts. Sprinkle over the cornflour and whisk until it thickens into a smooth, silky mixture. Take off the heat and stir in the bourbon, egg yolks and salt, followed by the crushed pecans.

Tip into the pie crust and arrange the remaining pecans on top. Bake for about 25 minutes until set on top. Allow to cool before serving.

Pecan pie: southern gem or poor pretender to the pumpkin's crown? And if you're not sold on either, what will the Americans among you be making for dessert tonight?