How to Make the Perfect Sangria 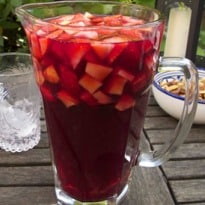 Is sangria a holiday thirstquencher or drink of el diablo? What do you put in yours, and if you're not a fan, do any other summer punches hit the spot?

When my editor suggested sangria for the column, I had a flashback to a Spanish holiday spent with a schoolfriend when I was about 14. After her parents had gone to bed, we climbed out of a window, and reached an agreement with her elder brother at the nearby bar: buy us a couple of jugs of sangria, and you won't see us for the rest of the evening. I will draw a veil over the rest, except to say that Kingsley Amis clearly wasn't thinking of teenage girls when he described sangria as "cheap, easy to make up and pretty harmless - so that you can drink a lot of it without falling down".

Even today, it's a combination that screams headache to me. But, professional to the tips of my espadrilles, I gamely agreed to address my fear head on, and spend a Saturday evening drinking sangria. (The things I do for this column!)

Preliminary research revealed that, though no doubt there are unscrupulous bars that use it as a handy way to dispose of stale wine, sangria has a more sophisticated side, hitherto unknown to me - I found a Basque version infused with spice and juniper berries, and a white sangria flavoured with albarino and sake. But there's no getting around the issue: I'm going to have to give the classic blood-red one a whirl, and hope for the best.

Obviously the most important aspect of any wine-based cocktail - which is to say, don't seize the opportunity to use up that half bottle of cooking wine that's been hanging around the hob for a month. Conversely, Larousse Cocktails' specification of rioja seems a bit OTT - the cheapest bottle I can find is over £6, and once everything else is added, no one can tell it from the "cheap Spanish red" called for by Victoria Moore in How to Drink.

That turns out to be garnacha, as specified by Frank Camorra of Melbourne restaurant MoVida, which works perfectly well in all the recipes - indeed anything dry, red, relatively full-bodied and halfway drinkable will do.

You can stop there if you like, but, after trying a recipe from New York's Pata Negra (frequented by Deb Perelman of the superlative blog Smitten Kitchen), I'm adding some chilled, fruity Spanish rose as well: it brings a deliciously refreshing note to what, after all, is very much a hot weather drink.

Innocent that I am, it came as something of a surprise that sangria was spiked with stronger alcohols. There's a bewildering range of options, but brandy, whether Spanish, or French (trust Larousse) seems to be a given.

Vodka, as used by Dale DeGroff ("widely acknowledged to be the world's greatest living bartender" according to the jacket of his excellent book, The Craft of the Cocktail) seems like booze for booze's sake (as does the gin in Moore's recipe), but I like the orange curacao he deploys.

In fact, orange-flavoured spirits are a popular choice, used by Larousse, Moore and MoVida, which makes sense, as sangria often includes oranges in some form and they're a classic pairing with red wine in recipes like duck a l'orange and, of course, mulled wine.

MoVida also adds a sweet Spanish liqueur by the name of Licor 43; the name is apparently a boast about the number of herbs used in the recipe, but according to DeGroff, the predominant flavour is vanilla. I'm not keen on it, Spanish or not, but I do like its sweetness - something echoed by Moore's fortified wine: marsala, madeira or malaga will all do. The madeira I go for blends in better than the Licor 43, adding a rich, honeyed sweetness far more delicious than the boring old sugar used in the other recipes.

Moore, who says she got her recipe "passed over the fence" by her parents' late next-door neighbour, who had collected it from a Marbella restaurant in the 1980s, also adds golden rum and red vermouth. Unsurprisingly, she says, said neighbour was never short of barbecue invitations, although I do wonder how safe it would be to combine such a concoction with naked flames. It definitely has some poke, but I think these ingredients are what might be termed "optional extras". Like sparklers, and paper parasols, say.

Orange juice, of course, is quite popular: Larousse and DeGroff both add it, but I think his muddled fresh fruit adds a much fresher, zestier acidity to the jug. He also uses grape juice, but as I've already lost my heart to Moore's fortified wine, I won't be needing any.

Unless you want to be under the table before sunset, you'll need something to dilute this heady mixture. Soda water, as used by DeGroff and Larousse, does the job rather too well: the sangria tastes muted. Moore uses lemonade but best of all is the orangeade deployed by Pata Negra and MoVida - the New Yorkers recommend "a less sweet brand such as the Spanish KAS or San Pellegrino aranciata, or use Fanta". The Italian aranciata I find has a more sophisticated, bitter edge than your average fizzy orange drink, while giving the sangria a fruitier, richer flavour than straight sparkling water.

Thanks to the orangeade and the fortified wine, there's no need to add any extra sugar as Pata Negra, Larousse and DeGroff do.

It does help, if time permits, to let the base ingredients mingle for an hour or so before adding the fruit and orangeade - Larousse and MoVida stick in a cinnamon stick, which is a nice idea, if you don't mind your sangria tasting ever so slightly like cold mulled wine. I'd prefer to keep the flavours rather fresher.

Apart from the muddled oranges, fruit should, I think, be seasonal - and in small enough chunks to be eaten, because one of the joys of sangria is the big juicy mouthful of alcoholic fruit lurking at the bottom of the glass. MoVida use plums, which would be lovely later in the summer, but for now I'd go for strawberries, peaches or anything else you can find going cheap. Basically, when it comes to sangria, the more the merrier.

Put the orange slices in the bottom of a large jug or bowl, and muddle, or squash, using a wooden spoon or similar. Add the wines and spirits, cover, and leave in the fridge to get to know each other for at least an hour.

Add the fruit and, if your jug is large enough, the orangeade, and serve over ice. If not, serve the orangeade separately, for people to top up with (which runs the risk of being left with lots of mixers, and some very drunk guests).

Sangria: holiday thirstquencher or drink of el diablo? What do you put in yours, and if you're not a fan, do any other summer punches hit the spot?