Include Olive Oil in Your Diet to Prevent Heart Failure: Study 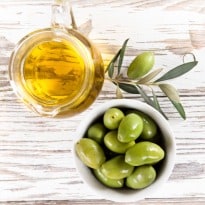 Drizzle it over your salad, use it as a dip for freshly-baked bread or cook with it - olive oil works like a dream every time. It's thick, consistent, silky and the core ingredient of the calorie-friendly Mediterranean diet. It's got many rivals on the market shelf but its distinct taste and string of health benefits helps it to stand out: olive oil helps lower the risk of diabetes, it helps reduce wrinkles, works against bad cholesterol and helps prevent cancer.

According to a new study published in the journal 'Circulation', oleate, the common dietary fat found in olive oil helps failing hearts use body fat as fuel. Usually, a healthy heart absorbs fat to keep pumping. But when the heart is damaged, it can no longer store and process fat which leads to lack of energy. Not only does the heart not function properly, but the toxic fat it leaves behind can clog the arteries.

Oleate (fat in the olive oil) can kick-start the genes which produce enzymes that break down fat which can then be absorbed by the heart. According to E. Douglas Lewandowski, senior study author at the University of Illinois, Chicago "This gives more proof to the idea that consuming healthy fats like oleate can have a significantly positive effect on cardiac health even after the disease has begun." He added, "These genes are often suppressed in hyper-trophic hearts. The fact that we can restore beneficial gene expression, as well as more balanced fat metabolism, plus reduce toxic fat metabolites, just by supplying hearts with oleate is a very exciting finding."

For the study, researchers observed the beating hearts of rats and how they responded to the supply of either oleate or palmitate, a fat associated with the Western diet and found in dairy products, animal fats and palm oil. When the researchers introduced oleate through a failing hearts, they saw an immediate improvement in how the hearts contracted and pumped blood. However, when the animal fat was used the diseased hearts worsened. Previous studies have suggested how olive oil can reduce the risk of heart disease, but this is the first time around that the exact compound had been identified.