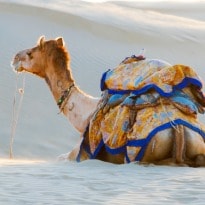 The Food Safety and Standards Association of India (FSSAI) is yet to frame standards for the sale of camel milk across the country although it is being produced and sold locally in certain areas. Bikaner based National Research Centre on Camel (NRCC) supplies camel milk as well as other products like delectable Indian desserts, butter, ghee and paneer. According to the research center, "Camel milk and its products were sold for Rs. 2.96 lakh during the year 2010-11 from the milk parlour of the Centre."

The NRCC had approached FSSAI to formulate standards that could authorize the production and supply of camel milk and associated products.

Image via Pinterest/indulgy
With a consistent dip in the total camel population, local camel breeders of Rajasthan are more than unhappy and unsure of what to do with the animals. Animal culture researcher and Activist, Dr. Ilse Kohler Rollefson says,"I have been in India for over 20 years now, since then the total camel population has dropped drastically. There were some 10 lakh then, only close to 3 lakh remain now. There are no grazing land left for them, no proper medical care and the market is also dying."

Camel Charisma is one such local body. Founded in the year 2010 by the director of Lokhit PashuPalan Sansthan and Dr. Ilse Kohler Rollefson, the organization's motto has been, "to provide economic incentives for camel breeders to continue keeping camels for their livelihood and to contribute to the sustainable management of the Thar Desert and conserve this biodiversity rich agro-ecosystem." as quoted on their site.

Promoted
Listen to the latest songs, only on JioSaavn.com
Raika leader tasting camel ice-cream at Pushkar: Image via Camel Charisma
The Department of Animal Husbandry, Dairying and Fisheries has requested FSSAI to frame suitable standards for the production and sale of camel milk. The Supreme Court had already ruled in favour of camel milk production and consumption way back in the year 2000. Since then only a handful communities of Rajasthan's Bhilwara and Udaipur region have been producing and consuming it including the Rebari community. In fact, camel milk has been used to overcome various lifestyle diseases in these communities.

Today, the scenario seems to be shifting in favour of nationwide availability of camel milk.
FSSAI has set up an expert group to set standards for the sale of camel milk as a food product. Once the FSSAI gives a green nod, the states of Gujarat and Rajasthan can collectively produce 1.5 litres camel milk per day. In Gujarat, the project will primarily be vested with the Gujarat Cooperative Milk Marketing Federation. GCMM is the country's largest dairy cooperative and markets its products under the Amul brand. The GCMMF is of the opinion that once the project is approved by FSSAI, they can get the production going within six months at their Kutch site. They are also hoping to make camel milk available in the country starting from Ahmedabad. The Gujarat government has already sanctioned Rs.1 crore for the project.