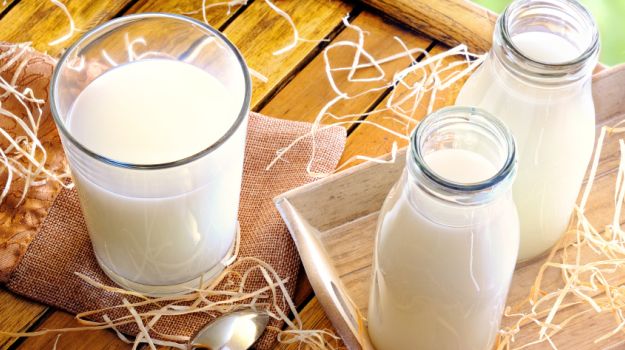 Highlights
By now, you’ve probably heard about organic milk as a healthier alternative to industrial milk which has been accused of being laden with antibiotics and stress hormones. Organic milk is essentially chemical-free and healthier as the cows are fed grass or organically cultivated fodder. Still, I always felt that a piece of the puzzle was missing. In his book, ‘Devil in the Milk: Illness, Health and the Politics of A1 and A2 Milk’, Dr. Keith Woodford reveals the real milk issue. It is the breed of the cow that matters.

Milk is a great source of calcium and protein. Casein is the largest group of proteins found in milk which makes up about 80% of the total protein content. A2 cows are the earlier breeds of cows like the desi Indian cows or the African cows that produce this protein in their milk along with an amino acid called Proline. In the new hybrid breeds, the proline amino acid got converted to Histidine due to alteration of genes over the years. These are the A1 cows that include breeds like Holstein, Friesian and Ayrshire. Stay with me.

Proline is strongly bonded to a small protein called BCM 7, which prevents it from getting into the milk produced by A2 cows. On the other hand, Histidine holds a weak bond with BCM 7, so it is easily released in the GI tract of animals and can enter the human body on consumption of milk from A1 cows and interact with the digestive system and internal organs.Why is it Harmful?

A group of Russian researchers have shown that BCM 7 does pass into the blood of babies who were fed infant formula which led to delayed psycho-motor (brain-to-muscle) development (as published in the International Journal ‘Peptides’). Another report, published in the Indian Journal of Endocrinology and  Metabolism in 2012, indicates that it is associated as a risk factor for type-1 diabetes, coronary heart disease and mental disorders like autism and schizophrenia because it may enter your brain through blood. This tricky devil remains a mystery as most of the evidence is based on animal trials and these diseases have a wide range of contributing factors. A human clinical trial conducted at Curtin University in Australia did prove that there were significant differences in digestive symptoms between milks containing A1 and A2 beta-casein. It has been approved that certain unwanted proteins or peptides that do not naturally occur in the human body may cause digestive disorders like irritable bowel syndrome or a weak gut.

Sanjay Bhalla, Founder of 'The Way We Are' that sells A2 milk in New Delhi, makes it easy for us to understand, “A1 and A2 beta-casein are basically two types of proteins found in different milk varieties. BCM-7 is an opioid peptide that is released during the digestion of the protein found in A1 milk. Since it is not absorbed well by the human body, it may trigger adverse health effects. In New Zealand, there has been a clear distinction between two types of cows – the ones that give drinking milk and those that are known for draught power and used for ploughing, cheese-making or their meat. The Bos Indicus cow is the desi breed that produces the A2 milk with the good quality protein but it has been conveniently replaced by the high-yielding cross breed, popularly known as HF or Holstein Friesian in India which provides the A1 variety of milk. This is something you need to consider beyond the 'type' of milk.”

A little back story. It all began in 1970 when Operation Flood was launched by the National Dairy Development board which transformed India from a milk deficient nation into the largest milk producer in the world. The mission of the project was three-fold - increase production, boost rural production and offer fair prices to consumers.

“The sad reality of the white revolution was that it led to cross-breeding with European cows and import of foreign hybrid breeds for higher yield in order to meet the goal of mass production. This has brought us to a situation today where the desi cow has become a dying breed in India. Imagine this - the Gir cow, which is a Gujarati breed, is now being imported from Brazil and the Brahmi Bull, which is another pure breed, is more popular in Australia. It’s ironic that people in these countries are drinking better quality milk from cows native to our country” shares Shakti Lumba, owner of Laksh Farms in Mangar Village in Haryana where he produces organic milk.

Anuradha Modi, Founder of Holy Cow Foundation which works for the economic sustainability of cows, has her own herd of cattle as she does not prefer buying milk from the markets, “If the Indian breed gives 8 liters of milk, the HF variety produces 15 to 20 litres of milk and that makes all the difference. In a bid to feed our growing population we have neglected our native breeds of cows whose milk was always considered to be medicinal. After so many years, we seem to have woken up to this reality and efforts are being made to conserve the native breeds of every region. For instance, Pathmeda in Rajasthan has over 1 lakh desi cows and besides milk, they sell skimmed milk powder to other states which is of the A2 variety. It is very important to know the source of the milk you’re drinking every day.”
I couldn’t agree more. Operation Flood also gave birth to the system of paying for milk as per the fat content. This concept has had two side effects – either people started keeping buffaloes whose milk has higher fat content or they resorted to adulteration. Case in point: I picked up toned milk packets from some popular brands and found that none of them mention that it’s cow’s milk. It can, therefore, be safely assumed that it is a mix of buffalo and cow’s milk.
While it’s an established fact that A1 and A2 milk differ due to their composition, the bigger problem in India is the way milk is procured. “There have been cases where farmers save the animal fat for family consumption and reintroduce cheap fatty solids in the form of vegetable oil, urea or even pork fat. Moreover, the management of cows is of great concern. At our farms, we have only kept desi Gir cows that are allowed to graze, soak in the sunlight and fed organic fodder cultivated at the farm along with immunity boosting herbs like Ashwagandha, Jeevanti and Shatavari,” says Mr. Bhalla.

Behind the Scenes in Dairy Farms

Khushboo Gupta who manages the Humane and Sustainable Agriculture project for the World Animal Protection NGO and often goes for inspections to farms gives me a glimpse of what happens behind-the-scenes, “The management of animals is the key to production and quality. During the 80's, dairy farms were confined within the cities as we’ve always had the culture of having fresh milk. Urbanisation led to peri-urban dairies that are now situated at the periphery of metro cities. Animals in peri-urban dairies are kept in dark, dingy places with no access to natural environment, fresh air or sunlight. I’ve visited a lot of them and the situation in quite grim. A small example from village level milk production in UP, a farm had seven ponds yet the cows didn’t have access to clean water. They were drinking water from the dirty drains as they were tied in sheds and couldn’t move around.”

That’s disturbing to know, considering milk is approximately 87% water. She shared an incident where cows suffering from Mastitis (an infection of the mammary gland) were still being milked and in another case where the cows were fed stale and expired bread with oil cakes and dry fodder. Khushboo raises an important question, “How can we expect such cows to produce milk that is healthy and nutritious?”

The bell is already tolling. You should know that all the giant milk companies don’t own their own dairies, instead they procure milk from farmers or such small holding dairy units that are in question. As per the FSSAI guidelines, this milk is only reviewed for fat and solids not fat (SNF). Dr. Saurabh Arora, Founder of the Food Safety Helpline clarifies, “There are regulations and guidelines regarding the production of milk but they apply to the companies and not the farmers. Globally, the food safety act includes everything from farm to fork but in India the agriculture sector has been left out because it is fragmented and very difficult to manage. Without controlling the product you cannot control the produce. Moreover, we do not have the infrastructure or labs to conducts tests to verify the difference between A1 or A2 milk or even for that matter, testing for pathogens. However, it is the responsibility of the companies who are procuring such milk to inspect for adulterants once every six months.”

There is an increasing demand for milk, the way it used to be - fresh from the cows in our backyard but for a country with a population that crosses the billion mark it does not seem like a viable solution. It should be the responsibility of the dairy companies to ensure the welfare of the animals in their procurement as a part of their sourcing policy. But the story still continues.

“We need to start somewhere. The growing incidence of lifestyle diseases is a warning to us. We are victims of the rampant commercialization and so is our indigenous breed of cows. The desi Indian cow is a very unique species and needs to be conserved. You can recognize them because of the hump on their back and long horns. Studies have shown that the rays of sun enter the body of the cow through the hump which makes their milk, dung and urine medicinal. If they are not exposed to the sun, they will not get the Vitamin D required to produce calcium in milk. More and more people are going back to the milk procured from native breeds like Sahiwal from Punjab, Gir from Gujarat, and Tharparkar from Rajasthan. It’s sad to know that Vechur, one of the healthiest breeds of desi cows from Kerala, is on the brink of extinction,” says Ramneesh Tangri, who runs Pashupati Gaushala in Noida.

CommentsThe bottom line? “In the medical world, it is still a question mark as most studies have been conducted on animals but it has been found that A2 milk contains more Omega-3 fatty acids which are good for your health. In a country which is predominantly vegetarian, milk is a very important source of nutrition. You need to make the right choices to seek the best quality. If A1 milk makes you feel bloated or uncomfortable, it’s alright to make the switch, as a lot of people have reported that A2 milk is easier to digest ” says Sheela Krishnaswamy, President, Indian Dietetic Association.