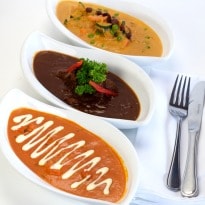 As global cuisines touch base with their roots to appreciate locally-grown raw materials, a group of Michelin chefs from Britain and Australia say it is a good time for Indian chefs as Indian cuisine is on the brink of being the next main food fashion and should make use of its strong and diverse heritage.

"Indian cuisine is on the brink of being the next main food fashion. I think chefs in the country should think ahead and learn to respect raw ingredients like exotic whole spices, individual flavours and fresh vegetables. The world is waking up to the flavour of exciting spices," said chef Frances Atkins, the owner of the Yorke Arms, a Michelin-starred fine dining restaurant in Britain.

Atkins said many chefs in India were using whole spices to create individual flavours for the international palette.

"In Great Britain, we are now in autumn. And we are looking at root vegetables. That is what India needs to do - to start to use the local ingredients instead of importing them," Atkins told IANS.

She was in the country for the three-day CSSG Gastronomy Summit 2012 - a gastronomic charity event.

The chef's favourite return-to-the-roots Indian dish tweaked to meld with the British palette is a version of the desi kitchddi - rice cooked with fresh morsels of fish, spices and garnished with crisp-fried diced okra at the top. The okra acts as a substitute for lentils in the kitchddi in the tiffin dish, Atkins says. The chef also uses fresh peppers in all her foods for the British have grown a taste for pungent peppers.Celebrity Michelin-starred chef Anjum Anand, whose vegetarian fusion dishes have taken British foodies by storm, attributes the roots movement in India to the fact that "two-thirds of India has followed a meat-free diet for thousands of years either because people can't afford meat on a regular basis or because they believe that eating it is bad for the soul (in a country that believes in reincarnation, they are not taking any chances)."

"Either way, this has given them a lot of time to perfect the culinary uses of lentils, beans and dairy products into a vast spectrum of dishes," Anand says in her new book "Anjum's Vegetarian Feast", launched in the country early this week.

One of her traditional fusion classics is the Coconut French Toast, a weekend breakfast dish of brioche bread, desiccated coconut, eggs and walnuts and jaggery.

"As long as you have the basic ingredients - such as onions, root ginger, tomatoes, garlic and yoghurt - you should be able to cook up delicious meals without last-minute dashes to shops," Anand says.

The return-to-the-roots eating can be traced back to slow food - a global movement founded by Carlo Petrini in 1986 as an alternative to fast food. The movement adopted by more than 150 countries has 100,000 members who believe in preserving regional and local cuisines with fresh ingredients produced locally and as much as possible organically.

Food is going back to its true provenance - the root of food, says Michelin starred chef Ian Curly, owner of The European at Melbourne.

"It is no longer Peking Duck Ravioli. Being experimental with food isn't the way of playing around with food just for the sake of it. Chefs are now campaigning for using local food and local produce. Local produce works out much cheaper and is a much better way of running a food business...Indian cuisine should make use of its heritage. It has such great food and it is a good time for Indian chefs," Curley told IANS.

The chef said he would take home kadhi - a traditional Indian dish of gramflour dumplings cooked in a gravy of yoghurt, tamarind and spices - to improvise on.

Michelin chef Laurie Gear, who owns neighbourhhod eatery Artichoke in Buckinghamshire, points to a parallel food trend in Britain that is making awareness of customer satisfaction its primary agenda.

"Gone are the days of complexities of gastronomy. You can have possibly little Michelin standard food, but you spend more time in being nice to clients than the way where you procure your food from," Gear told IANS.

The awareness is spreading across the globe.

CommentsIndia as a country "should embrace its own food because the country has such a rich heritage," the chef said.