Japanese Health Habit: Variety is the Spice of Life 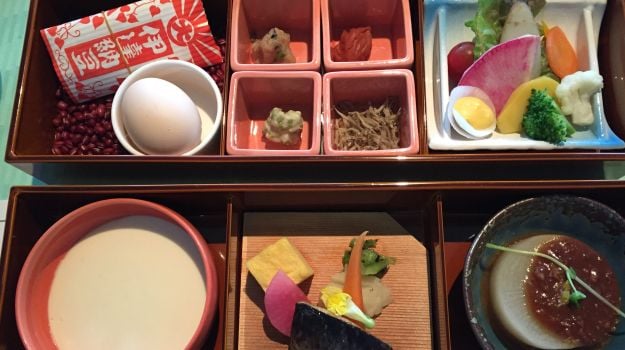 This Japanese meal has miso sauce, daikon radish, salmon, omelet, purple radish, cauliflower, broccoli, carrot, burdock, chestnut, grapes, dried baby fish - some of these rather small amounts. I give it a score 10 item including the accompanying bowl of rice and miso soup. Credit: Copyright 2016 Hiroko Shimbu

An official slogan for improving the nutrition of the Japanese population was issued by the Japanese government in 1985: “Consume Thirty Different Food Items Each Day.”

The food items were divided into six categories, and we were advised to choose evenly from each category. Each ingredient, it was said -- meat, poultry and fish, soybeans, grains, vegetables and fruits, milk products, and sea vegetables -- contains its own nutritional properties, so following this slogan will help to create balanced meals.

Even before this public announcement, there was a growing awareness that the Japanese diet since the turn of the 20th century had succumbed to influence from the West. It was thought that we must return to our own traditional diet to achieve optimum nutrition.

Just for fun, from time to time I still count how many different food items I have consumed in a single day.

This practice was instilled in me by my mother. Recently I made the count for all three meals, and found I'd consumed 21 separate foods on that day; far short of the government’s recommendation. This caused me to think. How and why did this government recommendation come about? Is it still a realistic guiding principle?Here is what I found.

Until 1868, Japan lagged far behind Western countries in technology, science and engineering because of the closure of the country to foreign trade for 260 years. Even the small physical stature of the Japanese population was blamed on a poor, very limited Japanese diet that was based on small quantities of rice, fish, soybean products, with some vegetables and seaweeds.

Yo-shoku dishes with their rich flavors and large servings instantly became national favorites: beef steak, pork cutlet, curry and rice, “omu-rice” (stir-fried morsels of chicken and rice, seasoned with tomato ketchup and wrapped in an omelet), to name a few.

During the heyday of Japanese boom-times in 1970-1990, even more varieties of Western foods became available and popular (provided by the major Western fast-food companies). And Japanese began consuming increasing quantities of rare cheeses, foie gras and expensive wines.

These dietary changes came with hefty penalties: Diabetes became more widespread. Heart disease became the number No. 2 killer in Japan. And -- this was formerly unthinkable -- morbid obesity is now present in the country.

Meals dominated by fat, meat, meat products, egg, sugar and milk products push up calorie consumption but not the number of daily food items. The broad categories of foods of the traditional complete Japanese diet such as seafood, seaweed, vegetables and more fruits are lacking. So the 1985 rule was an attempt to bring variety back to the everyday diet.

Want to try eating 30 different foods in a day? Choose at least two items from each of the six food categories. Since consuming vegetables and fruits is good for our health, add two additional items from categories 3 and 4. If you do this, you will easily approach 20 separate food items -- a good start for reaching the goal of 30 items that the Japanese government recommended.

By following this practice, you can change the way you plan and prepare meals to the benefit of your health.

The six categories of food items and what they provide:

2. Small fish that can be eaten whole with bones, milk and milk products (calcium).

3. Green and yellow vegetables (carotene, plus other vitamins and minerals).

4. Other vegetables and fruits (vitamin C, plus other vitamins and minerals).

As you begin your “Thirty Different Food Items Each Day” project, please observe the following rules. Do not count the same ingredient twice. Do not count ingredients used for garnishes in soups, salads and the like; they have minimal nutritional and caloric value. You can, however, count ketchup, mayonnaise and sauces, which have substantial caloric content.

When you reach 21 food items in a day, please send me photos and a description of the meals. I will share them with my audience.

Before then, please enjoy this stir-fried rice recipe, which gives you a 7 score for the dish.

I make this rice dish very often for lunch and dinner. The ingredients used here - carrot, onion, fennel bulb, kale, brown rice, pine nuts and olive oil - can be replaced with other ingredients that you may have in your kitchen. A flavorful and satisfying vegetable rice dish anytime. Credit: Copyright 2016 Hiroko Shimbu

1. Heat a wok or deep skillet over medium heat and add 1 1/2 tablespoons of the oil. When the oil is hot, add the onion along with pinch of salt and cook, stirring, 1 minute.

2. Add the carrot, fennel bulb and kale stem along with pinch of sea salt and cook, stirring, 2 minutes.

3. Add the kale leaves, and cook, stirring, 30 seconds. Move the vegetables to one end of the wok (or transfer to a temporary bowl). Add the remaining 1 1/2 tablespoons oil in the empty space of the wok.

4. When the oil is hot, add the rice and cook, over medium heat, stirring, until the rice is fully heated up, or about 2 minutes. Then combine and toss the rice with the cooked vegetables. Add the pine nuts and give several large stirs. Add the butter, soy sauce and freshly ground black pepper and toss the mixture thoroughly. Divide the rice among 4 plates and serve hot.