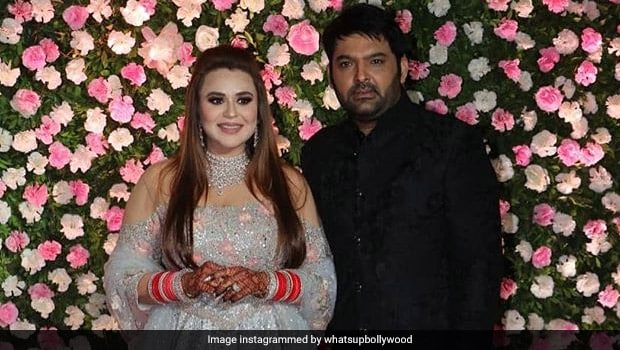 Kapil Sharma And Ginni Chatrath At Their Wedding Reception In Mumbai

Comedian and Bollywood actor Kapil Sharma got married to his long-time girlfriend Ginni Chatrath on December 12, 2018, among much fanfare. The wedding was just one of the many celebrity weddings that stirred up much interest among Indians around the world. Kapil Sharma, who is back on TV with a new season of his comedy show, also hosted a sparkling wedding reception in Mumbai for his friends and colleagues in the industry. The reception was hosted in a 5-star hotel in Mumbai on December 24th, 2018, and a number of Bollywood A-listers, directors, producers and even sports stars were in attendance at the high-profile event. Among the esteemed guest list were newlyweds Deepika Padukone and Ranveer Singh, as well as tennis star Saina Nehwal. A number of Sharma's colleagues, including Krushna Abhishek and Kashmera, as well as well-known daily soap actors Jay Bhanushali and Mahhi Vij were also present.

But all the finery on the reception red carpet could hardly compete with the grandeur of the wedding reception cake! A picture of the cake has been doing the rounds on Instagram, wowing fans and followers of Kapil Sharma. The beautiful and intricately decorated wedding reception cake has five tiers and is decorated with flowers, vines and glittery fondant. In the middle of the cake, the initials of the bride and the groom- GK - is embossed.

Doesn't the cake look simply stunning? The cake appears to have been cut at the couple's reception in Mumbai. However, we're not sure which bakery or confectioner has created the cake.

Kapil Sharma and Ginni Chatrath's wedding reception was a much-talked about affair, with Sharma setting a fine example of a gracious host by ordering in a cake to celebrate Ranveer Singh and Deepika Padukone's wedding.

Also Read: Kapil Sharma Gushing About Parathas With Makkhan On Instagram Is All Of Us! (See Pic)