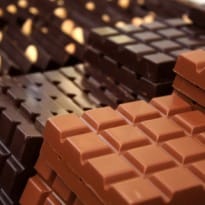 Latin America, the birthplace of cocoa, trails far behind West Africa in terms of production, but an increase in world demand - notably in Asia - could give the region a needed boost. The cocoa beans from Central and South America are known as being of high quality - fulfilling a certain niche, especially among consumers in Europe.

"We have good signs of growth in Asia, where the cocoa market will grow from five to nine percent in the next four to five years," said Juergen Steinemann, managing director of Barry Callebaut, one of the world's largest cocoa processors. Latin America will account for 16 percent of world production in 2013-2014, or 666,000 tons out of a total of 4.1 million tons, according to the London-based International Cocoa Organization (ICCO).

- India and China demand on rise -

Thomas Pugh, a commodities specialist with the British investment consultancy Capital Economics, predicts a fairly strong increase in Latin American supply in the coming years. "The biggest producers will continue to be in West Africa, but the forecasts for Latin America are good," he told AFP.

Demand for cocoa from emerging countries is booming, especially in China, said Florence Pradier, the secretary general of Paris-based chocolate association Alliance 7. That, paired with a strong resurgence in demand from traditional chocolate consumers in Europe and North America, is good news for producers.

According to a recent report by the French commodity research group Cyclope, demand in Asia is also being driven by India, with the strongest growth in the world at 20-25 percent a year. World production of cocoa is broadly dominated by Ivory Coast, at 1.5 million tons forecast for 2013-2014, and Ghana at 870,000 tons in the same period. But Latin America can make a dent if demand for high-quality cocoa rises.

Cocoa production "could change depending on how the market evolves," said Moises Gomez of the ICCO. "Most of world demand is for normal cocoa and it comes mainly from West Africa. Fine cocoa, which accounts for five percent of demand, comes from Latin America," Gomez said.

"Europe is the biggest buyer of top-grade cocoa," he said. "Americans are used to chocolate with a high milk and sugar content, and for that, you do not need high-quality cocoa. But when you want a dark cocoa with good taste, you look for cocoa from Latin America or Madagascar," he added.

Weather conditions and soil are the things that contribute most to the taste of the various grades of cocoa, said Gomez. He said while several high grades of cocoa were planted in Africa, they were not of the same quality as those in Latin America. All the different strains, from garden variety to hybrids, grow well in Latin America. And this happens in much of the region.

Ecuador and Brazil lead the way, each producing about 200,000 tons a year, to the tune of $500 million in revenue. But Peru, Venezuela, Colombia, the Dominican Republic, Central America and Mexico are also in the game. With production in 2013 of 63,000 tons, Peru is an example of betting on high-quality product - and the difficulty of satisfying consumers' changing tastes.

Promoted
Listen to the latest songs, only on JioSaavn.com
"Our production does not allow us to offer large volume," said Carmen Rosa Chavez, who works with the Peruvian agriculture ministry. That makes it difficult to stay competitive, she added. So Peru tries to stand out by investing in organic production. "The problem is that we do not make enough to satisfy" demand from big European manufacturers, said Francisco Riva, head of the Peruvian Association of Cocoa Producers.

But with world demand on the rise, Pradier suggests countries must act now to avoid shortages in the future, in particular by supporting producers and improving output.