Make your own pistachio lassi | Drinks 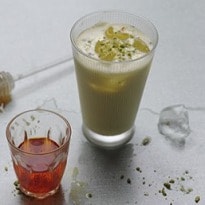 The trouble with stating an opinion is that it is so easy to get stuck there. I tried on ferocious atheism as a teenager, like a pair of gold leather trousers, just to see what effect it would have on people - and I'm still wearing it today (albeit mellowed with time).

But I don't mind missing out on God half as much as I regret taking the wrong position on lassi. I was offered the classic Indian yoghurt drink in Mumbai with my mum, many years ago.

"Salt or sweet?" the waiter asked. I could sense at once that this was a character-defining question. I wasn't being asked what I wanted, but who I was.

I instinctively knew that the kind of guy who drank salt lassi was the kind of guy I wanted to be. He would chow down at street food stalls rather than dine in hotels. He loved his offal. He would inhale deeply from the musty vapours of the kimchi crock. Here was a man who would never order chicken breast from a restaurant menu. Here, in short, was a man.

"Salt", I said firmly. I'm sure I noticed a glint of surprised approval in mother's eyes before she wisely ordered sweet.

And, Lord, have I paid for that decision? To this day, obedient to some malformed sense of self, I always order disgusting salt lassis when offered the choice and sip miserably at the briny liquor.

Well, no more: I here declare I prefer my lassi sweet. That doesn't make me a bad man, mum, it's just who I am.

To celebrate this coming out (and the fact that this week was Diwali) here is a recipe for a sweet pistachio lassi, made with milk rather than water for extra creaminess, and scented with saffron, rosewater, cardamom - and liberation.

Which unwanted opinions are you going to slough off as you drink yours?

Make your own pistachio lassi

1 Gently infuse the saffron in a splash of warm water or milk for 10 minutes. Allow to cool, and add to the rest of the milk.

2 Place all the ingredients except the ice in a blender and blitz until smooth.

3 Add a few ice cubes to each glass and pour the lassi over them. Garnish with pistachios and serve.

Photo: Bombay fix: a creamy pistachio lassi. The salty ones are nice too, apparently. Photograph: Jill Mead for the Guardian