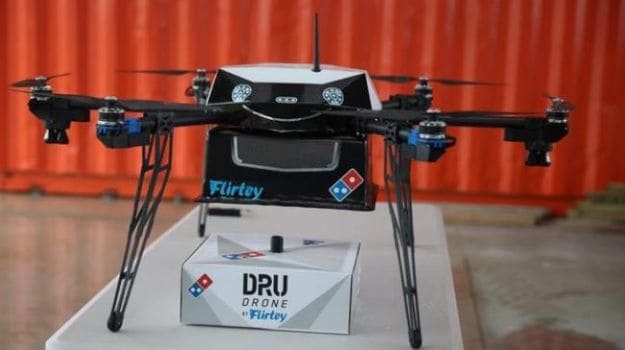 New Zealand's pizza lovers will be among the first in the world to have their favourite meal delivered by a drone, revealed Transport Minister Simon Bridges. Bridges welcomed the announcement that Domino's Pizza Enterprises had joined forces with unmanned aerial vehicle (UAV) developer Flirtey to launch the drone delivery service, Xinhua news agency reported. "Domino's and Flirtey have chosen New Zealand for the trial because our forward-thinking aviation regulations encourage innovation, while protecting safety," Bridges said in a statement. Store-to-door drone deliveries would start from selected Domino's stores after daylight savings starts on September 25.

New aviation rules came into force in August 2015 to regulate and enable the use of UAVs for recreational and commercial purposes in New Zealand. "The announcement of this trial confirms that New Zealand's framework for UAVs is world-class. Domino's chief executive Don Meij said that drones extend the delivery areas by removing barriers such as traffic and access, as well as offering faster, safer deliveries. Domino's is also working with the Government to test an autonomous pizza delivery vehicle designed to keep pizzas hot and drinks cold, while travelling on the footpath from the store to the customer's door.
Listen to the latest songs, only on JioSaavn.com
Domino's selected New Zealand for the drone trial because it had the most forward-thinking aviation regulations in the world, Meij said.Transport Minister Simon Bridges said the trial was a valuable opportunity for the CAA. New aviation rules came into effect in August last year to regulate and enable the use of drones for recreational and commercial purposes in New Zealand. "I have been actively promoting New Zealand as a test bed for new transport technology trials," Bridges said. "Domino's was also looking at opportunities for drone delivery trials in Australia, Belgium, France, The Netherlands, Japan and Germany," CAA spokeswoman Philippa Lagan said.

Domino's will be able to fly pizza deliveries later this year if its application to carry out operation is approved, she said. In addition, the government has reviewed the laws for driver less vehicles and small passenger service operators, to ensure that New Zealand stays at the forefront of transport innovation," said Bridges. The trial was also a valuable opportunity for the Civil Aviation Authority, the aviation safety regulator, to make sure that appropriate safety precautions were taken when the trial got underway later this year. The government is also continuing to work with Domino's on the possibility of testing a driver less pizza delivery unit on land. The US-based pizza chain announced in March this year that it has been exploring the possibility of testing a pizza delivery robot in New Zealand.