#NewMenuAlert: Delhi Vs Lucknow; Witness The Ultimate Culinary Clash Of Titans At The Imperial, New Delhi

From the spicy and flavourful curries of purani Dilli to the melt-in-mouth aromatic kebabs of Lucknow, brace yourself for the best foodie face-off in town. 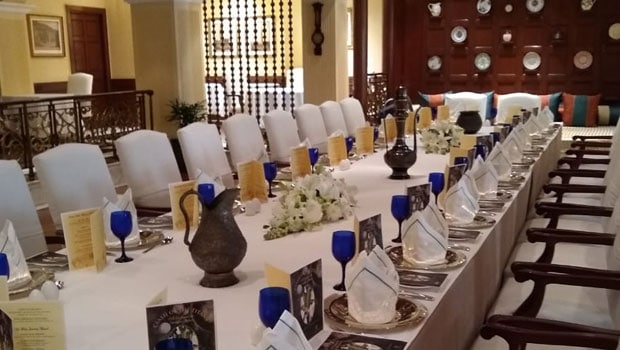 Delhi and Lucknow are unarguably two of the most historically rich cities of our country. Glorious empires, foreign invasions, refugees; these cities have lived through so much that history books often do not do justice to chronicle the same. This is why culture enthusiasts are on a constant lookout for as many relics and remnants of past that serve as a reminder of the era gone by. Both Delhi and Lucknow have managed to preserve it reasonably well in multiple ways, one of them being their culinary know-how. Daniell's Tavern at The Imperial Hotel, is paying an ode to the rich gastronomic heritage of both the cities in its upcoming food festival, 'The Clash of The Titans- Dilli Ka Swad and Lucknawi Andaz'. Chef Ved Prakash and Chef Mirza Munnawar Baig at The Imperial will be presenting a perfect ensemble of hand-picked traditional favourites from Delhi and Lucknow respectively. From the spicy and flavourful curries of purani Dilli to the melt-in-mouth aromatic kebabs of Lucknow, brace yourself for the best foodie face-off in town.

Vijay Wanchoo, Sr. Executive Vice President and General Manager, The Imperial New Delhi, tells us that "The concept of 'Clash of the Titans' takes you on a delectable culinary journey of Hindustan and revives the traditional recipes, passed on to our Masterchefs Ved and Mirza by their forefathers. The menus by the chefs revisit the legendary food aesthetics of Lucknow and purani Dilli, passed on from generation to generation."

(Also Read: Dehlvi Cuisine: How Did Delhi With All Its Diversities Find Its Very Own Cuisine?)

He further says, "The magic is recreated for discerning diners with Gosht ki Ghilawat, Kakori kebabs, Chakunder aur Raamdana ki tikki along with an array of Dum Biryanis by Chef Mirza while Chef Ved offers his meticulous craftsmanship with Guchhi Mussalam, Mahi Nazakat, Dilli 6  ka Mutton Korma with purani Dilli ka Shahi Tukda, all to reconnect with our forgotten recipes."

From their stash of secret ingredients and recipes, both Chef Ved and Chef Mirza have curated a spread that they have grown up with. Chef Mirza happens to be the fourth generation of Khansama from Lucknow. His forefathers have cooked for the Nawabs of the royal courts of Awadh. He has used his own blend of spices in his kebabs and biryanis that he has inherited from his family. Bringing the Dilli ka swad on table is Chef Ved. His grandfather was the head chef of one of Chandni Chowk's most popular dhaba in the pre-partition era.

(Also Read: Shahi Tukda: The Mughlai Bread Pudding We Can't Get Enough Of)

So what is the essential difference between Awadhi and Delhi cuisine? Chef Ved told us that Delhi loves its gravy or any preparation for that matter to be spicy, chatpata and decadent. There is also a dominant use of garlic in our preparations that is not so common in Awadhi delights. Both his Paya Shorba and Purani Dilli Ka Mutton Korma, are both rich in spices and texture. While Awadhi preparations also make use of select spices, there is also a conscious attempt to make the dishes aromatic. There is a distinct use of kewda, cardamom and ittar.

We tried and absolutely loved the melt-in-mouth Dahi Anjeer ke Kebab, Mahi Nazakat (Sole fish tikka) and Chakunder aur Raamdana ki Tikki; tender, flavourful and so delicious. Kakori and Galauti kebabs cooked on coal with a secret spice mix are sure to leave you craving for more. The soothing Mutton Korma and Subz Badaam ka Shorba are all things winter-y and comforting. Vegetarians may also try their rich and robust Gucchi Mussallam, a spicy mushroom preparation made with khoya, cheese, saffron, ghee and fresh cream.


The festival will start from 17th November and would go on until the 24th of November only. So make sure you get to taste all these traditional delights at the earliest.