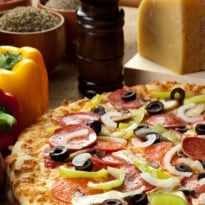 'Junk food' pizza gets a nutritional makeover! British scientists claim to have developed the world's first nutritionally-balanced pizza. Pizza is widely regarded as a member of the junk food gang. But, researchers say pizzas and many other nutritionally-dubious foods can be made nutritionally ideal.

"Traditional pizza should be a low-fat meal containing at least one portion of vegetables, so mainly made from ingredients associated with better cardiovascular health," said Professor Mike Lean, a physician and nutritionist in the School of Medicine at the University of Glasgow.

"However, to enhance shelf-life, commercial pizza recipes today include much more fat and salt than desirable. Until now, nobody has stopped to notice that many essential vitamins and minerals are very low or even completely absent. From a nutrition and health perspective, they are hazardous junk,"

Lean said.The team of scientists, which also included Dr Emilie Combet, Amandine Jarlot and Kofi Aidoo of Glasgow Caledonian University analysed a total of 25 Margarita pizzas. They varied widely in calorie content, ranging from 200 to 562kcal. Few approached the 600kcal energy requirement that would make it a proper meal, so people may tend to eat something extra.

Only six of 25 pizzas tested contained too much total fat, with eight having too much saturated fat while only two boasting a desirable level. The amount of sodium in most of the 25 pizzas was substantially over the recommended limit, with nine containing more than 1g per 600kcal serving.

To constitute a healthy nutritionally-balanced meal, at least 45 per cent of the energy intake should come from carbohydrates. Only five failed to meet this requirement, due to combined high fat and protein contents. Vitamin and mineral content information was mostly absent from the packaging, with only five providing this information in detail, and three having basic information. None met the recommended value for iron, vitamin C and vitamin A.

The proportions of bread base to Mozzarella cheese was adjusted to correct the carbohydrate/fat/protein ratios and minimise saturated fat content. After cooking, it was finally analysed in the laboratory.

Promoted
Listen to the latest songs, only on JioSaavn.com
The team put the end result to a taste test with members of the public and both children and adults gave it the thumbs-up for taste and attractiveness.