Preservation order: get fermenting and pickling those vegetables 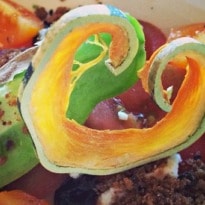 Preserving vegetables so they can be eaten at any time of the year is an ancient art. But using unusual techniques and ingredients can create whole new worlds of flavour

Do you love potatoes more than life itself? Are you a cook who just cannot get enough cabbage? No, thought not. Still, if you eat seasonally and avoid air-freighted fruit and veg, such worthy perennials may be all you have had to play with for the past few months. It's a problem that brothers Matt and Iain Pennington, chefs at the Ethicurean, near Bristol, know only too well. Having pledged to use solely local, seasonal British produce, getting through winter and keeping the menu colourful has been a challenge. Their answer? Preserving ingredients.

Now in their fourth year of business, they are constantly drying, salting and fermenting produce to call on year round. Which has introduced them to many weird and wonderful ingredients. "Year-on-year, the menu has got more interesting because we have this back larder of things that lend intense bursts of flavour," says Matt. Naturally, you want a kitchen filled with sunshine, 365 days a year. So how could you replicate what the Ethicurean is doing, at home?

Noma's Rene Redzepi has predicted that fermenting will be the next foraging. The Penningtons agree. "The depth of flavour that can be achieved is unbelievable," says Iain. Moreover, by adding complementary spices to their ferments, the brothers have affected remarkable transformations - their fermented squash, flavoured with cassia, coriander seed, cumin and caraway, tastes "identical to passion fruit". Matt knew fermenting would bring out fruity and umami flavours in vegetables, not just the tartness associated with, say, kimchi or sourdough, but he was astonished: "We've created flavours we said we wouldn't use because we're not going to import fruit. It's something we never expected."

Method: Cube the vegetable (0.5cm). In a nonreactive container (ceramic pot, plastic tub, covered with a loose lid or cloth), submerge the vegetables in a 2.5% salt water solution (25g salt to one litre of water). Depending on your kitchen temperature, in two to four days the liquid should reach a pH of below 3.5 (test with a pH meter, costing around £25, or litmus paper). Use immediately or refrigerate for up to a year.

If oxygen contaminates the food, it will spoil but, says Matt, "you would spot the moulds". Other than keeping an eye out for these, he says: "Once you understand the basic concept, you can be quite creative." Sandor Ellix Katz has written several useful books on fermenting, and you can find out more at Wildfermentation.com. Alex Lewin's Real Food Fermentation (Quarry Books) is particularly good for beginners.

No moisture means no enzyme action, means no rot. More importantly, says Iain, who dries everything from beetroot to fish roe: "You're concentrating flavour." There are numerous ways in which the Penningtons play around with and augment dried ingredients, not least by fermenting them first and then drying them. In the case of marrow ("a hard thing to find a use for," says Matt), that process has produced fermented-dried "crisps" which, simultaneously, pack a salty, citrussy, savoury umami punch. Thus you have, says Matt, "a vegan element as tasty or strong as bacon" - not from an exotic Japanese ingredient but by using an underused vegetable.

Method: Very thinly slice your ingredient. Place it on a wire rack in the oven at 40-50C overnight. Store the dried food in airtight jars, unrefrigerated.

A preserving no-brainer. As Matt says: "Take pretty much any vegetable, cube it [0.5cm - 1cm], coat it in 4% salt [4% of the vegetable's weight], leave it in a colander, and osmosis pulls out the moisture. After an hour, rinse it, plunge into vinegar and reverse osmotic pressure means the vegetable takes on the vinegar." Use a vinegar with an acidity of 6% or higher (it should say on the label) and the pickled veg should keep for a year, refrigerated in plastic tubs. At the Ethicurean they pickle everything from cherries to samphire with dried galangal. Apple, steeped in a dark sugar vinegar made with mulled cider spices, pairs well with pork belly. The Flavour Thesaurus (Bloomsbury) is a great guide to matching ingredients with sympathetic spices.

What are you waiting for? You may have the odd mishap (fermenting shiitake mushrooms, warns Matt, produces "something akin to mustard gas") but if you want to jazz up your winter 2015 cooking, now is the time to get prepared and start preserving.