Pressure Cooking Versus Open Cooking: Which One is a Better Cooking Technique? 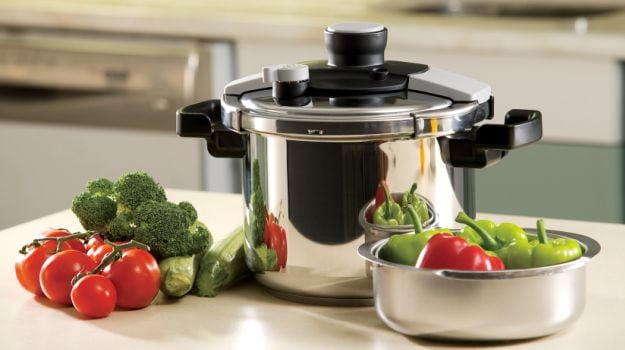 Highlights
Cooking is an art and to perfect your skills, you must use the right utensils and the right techniques. It is believed that slow-cooking is one of the healthiest forms of cooking perhaps better than quick methods like pressure cooking. Before you ascertain which one is better, it is important to know how pressure cooking differs from open cooking in terms of the technique as well as their effects on the nutritional value of the food.

How does pressure cooking work?

According to the book 'Diet & Nutrition: A Holistic Approach' by Rudolph Ballentine, the use of pressure cookers has been somewhat controversial. While some people claim that they reduce cooking time and thereby, minimise the destruction of nutrients, others have discouraged their use claiming that they destroy the food through increased pressure. Generally, it has been accepted that it is safe to cook food in a pressure cooker as long as cooking time is carefully regulated. Pressure cooking uses a combination of heat and steam. It is the steam and pressure that actually cook the food and not the high heat. A pressure cooker has a valve that seals in the steam, creating a high pressure environment. It increases the boiling point of the water or liquid in the cooker and further forces moisture into the food in the form of steam, which helps the food to cook quickly.

(Also read: Deep Pot vs Shallow Pan Cooking, Which One Would You Choose?)

How is open cooking different?

In case of open cooking, it all depends on the type of pot you use to cook the food. It can be a deep or a shallow skillet. In a shallow skillet, since the food is more exposed, the moisture is lost more easily than in deeper pots and the food tends to become dry. It takes slightly longer to cook in deeper pots as the water does not get enough surface area to evaporate but it is a better cooking method because the food retains its moisture and flavor. If the pan or the utensil is covered with a lid it has the same effect as a pressure cooker which is that vegetables may break down easily and lose liquid. The lid will allow the steam arising to be captured and the steam does the cooking.

According to Nutritionist and Macrobiotic Health Coach Shilpa Arora, "Pressure cookers require a lot of heat which makes the food cook faster. It is also an enclosed form of cooking and there is no contact with air. Therefore, the ingredients may remain uncooked from within which can hamper your digestion on being consumed. Slow cooking is a better cooking technique as it not only retains the nutrients but also the vitamins and minerals in the food are easily available to human body for digestion. Moreover, most pressure cookers are made of aluminum that may leach into our food when the cooker is overheated."

Ideally, foods should be cooked slowly on low flame to maintain their flavour and nutrients. Shilpa suggests that traditional techniques of cooking and eating in earthen pots should be adopted as they are healthier.