Ras No Fajeto: Why This Gujarati Mango Kadhi Is A Class Apart!

Ras No Fajeto was born out of the Gujarati sense of thriftiness and frugality that pushed them to invent a dish that utilises even the last dregs of mango pulp left on the seeds and peels. 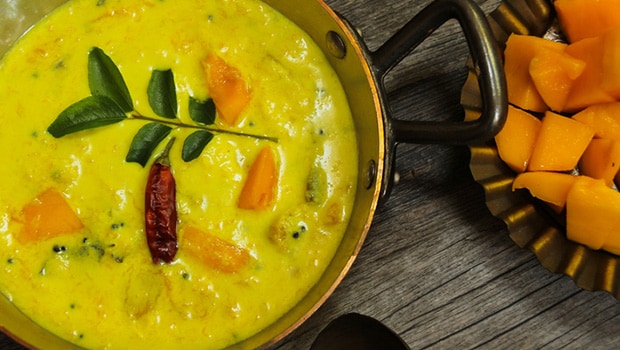 Highlights
Come summers, mango lovers across India get busy experimenting with this king of fruits. Indians are generally very creative with their food and one particular dish usually has several variants across the country. The recent back-to-the-roots culinary movement that is sweeping the world has put some of these lesser known variants of popular dishes into the limelight. We are going to focus on one such lesser known variant of the Indian kadhi, which is prepared with mango- the Gujarati Ras No Fajeto.

The fajeto might be known to a relatively small group of people in the subcontinent, but it is certainly a class apart among the various kadhis of India. The ras in the name refers to aam ras or diluted mango pulp, which is spiced, sweetened and eaten in several parts of India along with chapatis or fried hot puris. The fajeto in the name, according to Gujarati restaurateur Pinki Dixit, probably comes from the colloquial Gujarati word fajeta, which is a word used for something that has been used to death. The term makes complete sense in light of the process of making the dish.

Ras No Fajeto was born out of the Gujarati sense of thriftiness and frugality that pushed them to invent a dish that utilises even the last dregs of mango pulp left on the seeds and peels. "Gujaratis are a very frugal race", says Dixit, adding, "We want to ensure that everything is put to good use." No wonder then that the ras no fajeto is made from the pulp obtained from mango seeds after the majority of the pulp has been used in making aam ras. What makes the fajeto unique is that it is prepared using the pairi mango, instead of the more popular mango variety- the hapus or alphonso mango.

How To Make Ras No Fajeto

Chef Thomas Zacharias of The Bombay Canteen recently posted about the simple charms of this Gujarati delicacy on his Instagram page. Talking about the process of making the ras no fajeto he said, "The recipe involves cooking together the pulp of ripe pairi mangoes with yogurt and besan, and then adding a tadka of ghee, curry leaves and whole spices." He added, "While it's great with steamed rice, the traditional accompaniment for the fajeta is the double pad ni rotli or Be Pad ni Rotli, a ghee-laden, super thin whole-wheat chapati made by cooking together two flattened balls of dough which are later separated after cooking on the tawa, a technique I'd never seen before."

However, Pinki insists that the ras no fajeto can be relished on its own as well. "The dish has just a hint of mango in it and it's quite light. It can be enjoyed by mango-loving diabetics, who may otherwise not be allowed to eat the fruit. My mother even enjoys it chilled soup in the evening, whenever there's some leftover from lunch earlier", says Dixit, who owns the popular vegetarian restaurant Soam in Mumbai.

Also Read: 10 Popular Varieties of Mangoes in India & How to Identify Them

If you're a die-hard mango lover, who would love to experience the delights of this humble Gujarati preparation, The Bombay Canteen in Mumbai has introduced it on their menu for the entire month of May. For mango lovers in the rest of the part of the country, you now know how to make the most of your mangoes- simply make fajeta out of it and enjoy it with any bread or rice of your choice!

On the other hand, if you want to make a mango kadhi that has just a bit more of the mango in it, you can try your hand at our mango kadhi recipe. Watch the video below: