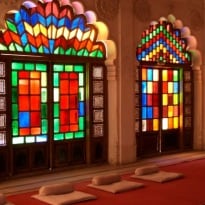 Erstwhile royal families have closely guarded culinary secrets of their kitchens like treasures down the ages. But the struggle to keep the estates sustainable is forcing the descendents to open up.

Nearly six decades after independence, the hosts of the royal palace resorts are opening their recipe books to contribute to the experimental culinary wave sweeping through the kitchens of urban India.

"Cooking a family recipe is like singing a 'ghazal'. It sounds different each time, but you know the flavour. One of our favourites was 'Shahi Sabzi Pulao'," Randhir Singh, scion of the family of the erstwhile Maharaja of Patiala, told IANS.

It was a dry pulao that could be improvised with meat arranged in layers, he said.

The pulao, originally cooked by royal chefs, has now been tweaked to suit the low-oil palate.

The pulao can be paired with "Murgh Musallam Laung Elaichi", a sweet and sour dry chicken dish with hints of clove, cardamom, lime juice and honey.

Like Patiala, till about a decade ago, Tripura was a culinary wilderness unknown to mainland India. The repast table of the Deb Barma family was a locked wonderland.

"General awareness about northeastern food is poor. Most of us are ethnically, linguistically and culturally of Tibeto-Burmese origin.

Our food is basic, represents plenty of eats with pork, bamboo shoots and red chillies. It is similar to Burmese cuisine with a bit of Cambodian spice blend," Pradyot Manikya Debbarma, scion of the erstwhile Tripura royal family, told IANS.

He lives for his "bhaat" -- a sticky rice variety -- like other northeasterners.

"It is a level world in our land because we are looked upon as custodians of the land, not rulers. We don't have a caste system and it tells on our royal cuisine as well," he said.

Fish is another staple, the former prince-turned-journalist-cum-cook from Tripura said.

"Sheena Kebab", "Tunde Ka Kebab" and "Kakori Kebab" - the signature of Awadh Dastarkhwan created by the Mughals -- long moved out of the palace to the neighbourhood eatery.

While Tunde Ka Kebab, named after an one-armed chef, uses 160 spices, Kakori has a divine legacy.

It was created at the 'dargah' of Hazrat Shah Abi Ahder Sahib in Lucknow with a mince of the "raan" of mutton and spices that still continue to vex the common cook.

"Dining With the Maharajas", a rent book published by Roli, says: "Every day, any given meal for Nawab Shuja-ud-Daula of Awadh and his wife was cooked in six different kitchens at a monthly cost of Rs.60,000. The amount did not include salaries of the cooks".

Legend has it that Mughal Emperor Jahangir had a weakness for chicken that was kept on a diet of saffron for a year.

It took at least 100 chickens to cook the dish with a special blend of spices, the book says.

Food and cuisine have been integral to Indian culture, says Neha Prasada, who authored the book with Ashima Narain.

"Traditional Indian cuisine is backed by years of experimentation. The fun is that the Indian royal cuisine has evolved with different influences.

Shehzadi Naghat Abidi from the former royal family of Lucknow says the cuisine is no longer confined to palace kitchens.

Promoted
Listen to the latest songs, only on JioSaavn.com
"From rich to poor, everyone loves "Tar Gosht", a traditional dish of Rampur served during feast after a man's wedding," Abidi told IANS.

"It is a gravy dish of either baby lamb or buffalo meat stir fried in a light spice base of ginger and chilly served with red tamarind dip and good wine," she said.