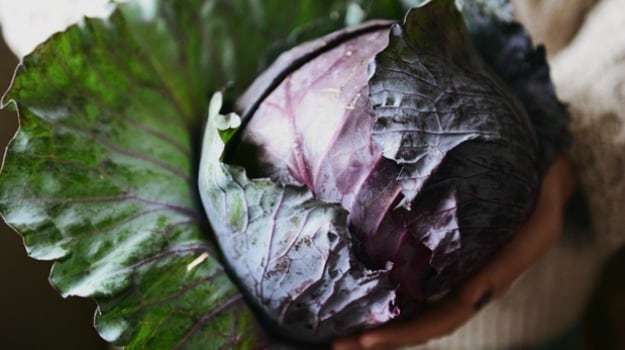 Large and luscious – the not so humble cabbage. Photograph: Lauren Bamford/The Guardian.

While known as a humble vegetable, the cabbage in season looks opulent and lavish. When you pickle it, a deep, savoury richness comes out.

I love the squeakiness of a fresh, whole cabbage – how they can be so big they have to be carried in the arms, rather than stuffed into a bag. With their heavy hearts and their wild, curling outer leaves, a stack of them at the market looks opulent, even though they’re often considered a humble vegetable. Sliced down the middle they’re just as pretty, with their intricate pattern of red and white.

Choose a cabbage that is brightly coloured, heavy for its size and with its crisp outer leaves still attached. Avoid those that are light, dull and have had their outer leaves removed. When cooking red cabbage, the cabbage needs something acidic to keep its red colour, vinegar works well, otherwise the cabbage turns quite blue. Red cabbage is wonderful finely shredded and served raw in a salad for something much lighter than the recipe below. A whole cabbage can be a big commitment, it goes a long way. But pickling, which preserves the cabbage, is a delicious way to deal with any excess. Use half the cabbage for this, as it stores well, and the other half can be eaten raw.

This recipe is adapted from one by Danish chef Claus Meyer. He uses duck fat instead of olive oil, which certainly brings a deep, savoury richness to the cabbage, but the cabbage itself is so flavourful, I don’t think it needs it. The flavours definitely have a hint of a northern hemisphere Christmas about them, but for those in the southern hemisphere the cooler months, which occur nowhere near Christmas are a lovely time to appreciate this sort of flavour palate. The cabbage would be wonderful served alongside roast pork, for example, or as we have, stuffed into a soft white bun with a pork and fennel sausage and some sweet chutney.

Make the cabbage ahead of time, it keeps in the fridge for two weeks, and the flavours mature over time. Serve warm.

In a heavy bottomed pot, slowly cook the shredded cabbage in the olive oil. When the cabbage starts to soften, add the spices, vinegar and apple juice. Add the salt and sugar and let simmer for about two hours. After two hours taste and adjust with a little extra salt, sugar of vinegar depending on the flavour. Place in a bowl and serve, or place in a jar and store for up to two weeks.