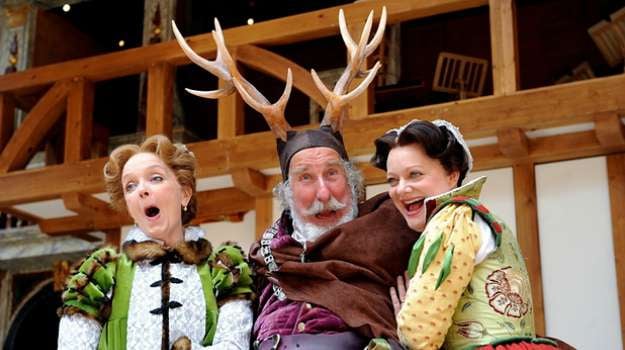 A toast to your health! Christopher Benjamin as the sherry-loving Falstaff, with Serena Evans and Sarah Woodward in The Merry Wives of Windsor at Shakespeare’s Globe, 2008. Photograph: Tristram Kenton/Guardian

Time for a little sherry cocktail anyone? No? But we can assure you that this historical tipple is muy tipico!

On Charles Dickens' gruelling 1867 tour of America, he took most of his nutrition from sherry flips

In my teens, I spent a few months in Barcelona trying in a desultory manner to learn Spanish. I lodged with an old lady who cooked for us in the evenings. She would always describe dishes I didn't like as muy tipico. I was reminded of her when back in Spain this summer. Everywhere, people were trying to force something called a rebujito " fino sherry and lemonade " down my neck telling me it was muy tipico. It's not unpleasant, just a bit dull.

In southern Europe, this kind of drink is very popular. In Oporto, they drink white port and lemonade, and a sort of turbo sangria made with ruby port. I thought they were recent creations, designed to halt rapidly declining sales of cheap wines, but they actually have a long history. Falstaff calls for a sort of sherry cocktail in the Merry Wives of Windsor: "Go fetch me a quart of sack [sherry]; put a toast in't." The Elizabethans would have drunk much of their sherry laced with sugar, spices and, er, toast.

It was America, however, that really went to town with the sherry cocktail. Before there was the martini there was the cobbler, "America's most ubiquitous cocktail" as Talia Baiocchi, author of a new book on sherry, puts it. This is simply sherry sweetened with sugar and served with crushed ice, oranges slices and mint. Martin Chuzzlewit, in the eponymous novel, refers to it as a "wonderful invention". Charles Dickens was a great fan of sherry-based drinks. On the gruelling 1867 tour of America, he took most of his nutrition from sherry flips: a mixture of sherry, eggs, sugar and nutmeg.

When making cocktails, Baiocchi recommends using dry sherries in place of French vermouth, and sweeter ones in place of Italian. Tony Conigliaro from the London bar 69 Colebrooke Row has a cocktail laboratory where he experiments with new combinations. His latest, the marsala martini, uses marsala instead of vermouth, almond bitters, and a pickled almond instead of an olive.

Well, I've been doing some experimenting in my cocktail laboratory. I found the rebujito improved immeasurably with the addition of good Jamaican rum. The cobbler I made with Tesco's Finest Amontillado was indeed delicious and actually gets nicer as the ice melts. My favourite, though, is the tuxedo. This is named after the New Jersey country club where the dinner jacket was invented. It's a mixture of two parts gin to one part sherry with a dash of orange bitters. The taste is like a very wet martini, the sherry and bitters combination functioning as the vermouth. I also wowed my wife while she was trying to cook (in my laboratory!) with a Princeton, a mixture of gin and port with orange bitters. It's poured so the port sits below the gin like a sort of Wasp's Irish coffee. And how did it taste? Muy tipico!

Henry Jeffreys' first book, Empire of Booze, will be published by Unbound in 2016. @henrygjeffreys