Shocking: Angelina Jolie and Kids Munch on Spiders and Crickets for Dinner 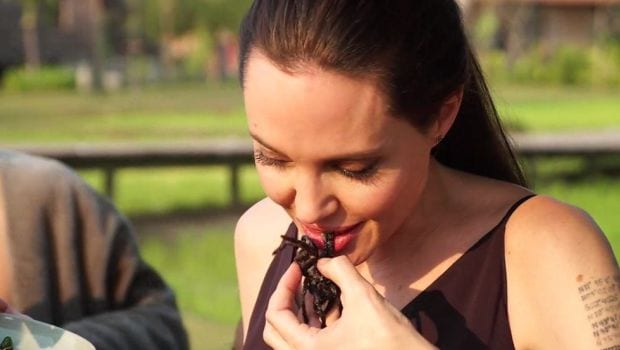 Do you have the nerves to eat bugs and spiders for dinner? Well, some people do! In an exclusive BBC World News video, Actress Angelina Jolie along with her kids is seen relishing spiders and scorpions. Angelina Jolie is in Cambodia to promote her latest film First They Killed My Father. The 41-year-old actress appears to be in a laxing mood with her children - Maddox, Pax, Zahara, Shiloh, and twins Knox and Vivienne in the interview. Angelina revealed that she ate crickets when she first visited Cambodia, from where she adopted Maddox as a baby in 2002. She says that the best way to start is to try the crickets first, along with a beer, and then move on to tarantulas.

In Cambodia it is a common delicacy among the locals. "I think it's always been a part of the diet (in Cambodia), the bugs, but then I think there is a truth to the survival during the war of course when people were being starved they were able to survive on things like this and they did," said the actor.

Angelina who was having a gala time, was also seen to be tutoring her children into eating spiders and scorpions. "You see the hard part is where you have the teeth, take the fangs out" she guided her children, while helping daughter Shilloh place the bug on to the frying pan. Flipping the scorpion in style, the children were more than amused to see their mother acing the cooking game.

Angelina Jolie next film, which is also a directorial venture, is based on a memoir of the Khmer Rouge regime of Cambodia.