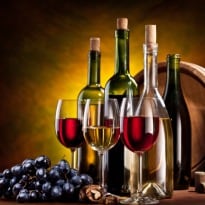 Vodka is the czar of Russian drinks -- ubiquitous, powerful and sometimes crude. Russia's wines are like a provincial nobleman, little-known but aspiring to refinement.

Foreign visitors to the Winter Olympics may be surprised Russia even has a wine industry. Most of the sprawling country has far too many frost days for grapes to ripen adequately, but a small corner of the country, including the Sochi area, stays warm enough long enough.

So local producers are aiming to educate Olympics visitors by setting up sales booths and conducting tastings. At one tasting, Zhanna Sadovskaya of the Myskhako Winery puts some Russian twists on the stereotype of oenophile prissiness. She gives instructions on how to hold the glass, savor the aroma and contemplate the color -- all part of the ritual -- then says, "We should speak about wine, but not too seriously."

The winery's operations are about 200 kilometers (120 miles) up the Black Sea coast from Sochi in an area where, she admits, the soil isn't particularly good. That's okay, she adds in a cryptic note of Slavic sternness, because "wine should suffer." Myskhako has earned some note at home, becoming a supplier to the Kremlin, but it seems a little unsure of itself up against the wine titans of France and Spain and Italy.

Promoted
Listen to the latest songs, only on JioSaavn.com
A Myskhako Merlot won a bronze medal at a wine competition in London last year and "it was a shock -- a surprise for everybody," Sadovskaya says.