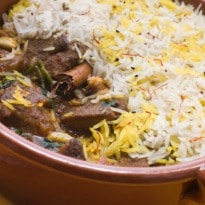 A business delegation from Britain currently visiting India loved the Hyderabadi biryani they had here and are now keen to see some food joints from the city selling the royal rice preparation and other delicacies in London.

Like all the visitors to this historic city, the British businessmen could not resist the temptation of having the famous Hyderabadi biryani - made of finest variety of rice cooked with mutton or chicken along with generous mix of spices.

Some Indian British in the delegation also see a good business potential for biryani and haleem (mostly available during Muslim holy month of Ramadan) and other royal dishes of Nizams (the rulers of erstwhile Hyderabad State) in London. Haleem is made by cooking minced meat with pulses, wheat and barley mixture.

With four million Asians, including two million Indians, London offers huge opportunity for those who can bring the real authentic Hyderabadi cuisine, Salil Patankar, a member of the delegation, told IANS.

Salil, who is managing director of ProActive Consultancy, a business consultancy, held talks with owners of Hyderabad House, which runs a chain of restaurants here and also plans to meet owners of Pista House, which made haleem famous in India and abroad, to take forward his proposal.

He pointed out that nobody from Andhra Pradesh or Hyderabad had ever taken the initiative to take authentic Hyderabadi food to London.

While there were hundreds of restaurants in London serving Indian food including biryani, Salil said, there is no restaurant claiming to sell Hyderabadi biryani in its entirety with Hyderabadi cuisine.

"There is a huge potential if there is a niche. There are Indian restaurants in every corner but something like Hyderabadi biryani and Kolhapuri mutton is missing. The market is huge as people need variety and different options," Salil said.

"What sells is princely taste. Nizam Shahi taste will sell in London and UK. Remember UK is a kingdom and queen is still the head of the state," he said.

Hyderabadi cuisine, a delightful mix of the Persian and the Mughlai, has a rich tradition with dishes prepared in enormous detail with a unique method, using a liberal dose of spices.

According to him, Pakistanis have successfully marketed their cuisine with the brand name Lahori restaurants.

Promoted
Listen to the latest songs, only on JioSaavn.com
Salil said while starting operations in Britain, the food joints will have to meet high standard of health, safety and hygiene.

He believes London has the best Indian food outside India. There are thousands of restaurants within M25 (a motorway surrounding London area) radius.