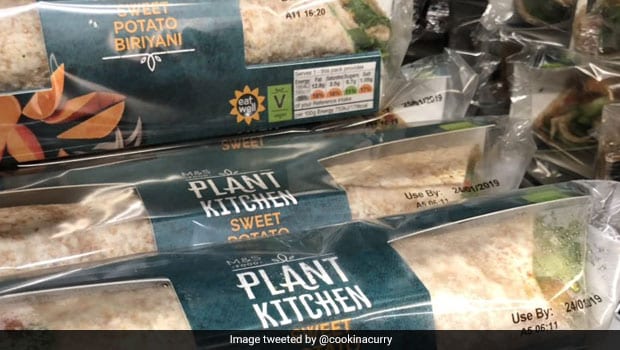 Biryani is one dish that desis around the world love to indulge in. The flavourful rice dish that is slow cooked with meat, including chicken, mutton and fish, is considered a delicacy fit for feasts and it has a universal appeal that cuts across regional preferences in the Indian subcontinent. It's no wonder then that if there are attempts to re-fashion the dish, it is not appreciated by biryani enthusiasts. Recently, fashion retail brand Marks & Spencer's faced flak for offering a 'vegan biryani wrap' at stores in the UK. The food product was a part of the retail giant's 'Plant Kitchen' range and it is being sold by the brand at £ 2.80 (approx. INR 261). The brand has come under intense criticism by Indians in the UK, with some people calling the product an example of cultural appropriation.

The claimed culinary faux pas by Marks & Spencer was first pointed out by India-born chef and author, Maunika Gowardhan, who shared a picture of Plant Kitchen's Sweet Potato Biryani wrap on her Twitter page saying, "Thanks but I like my Biryani with rice in a bowl not a wrap. Seriously M&S!?" Take a look:

Thanks but I like my Biryani with rice in a bowl not a wrap. Seriously M&S!? pic.twitter.com/XAqNfoUsN9

Talking to The Times, Chowdhary attempted to set the record straight: "Just to put it in perspective, in India firstly there is no such thing as a veg biryani." She added by saying that most Indian restaurants serve biryani with a kind of meat and that stuffing it inside a bread and serving it with lettuce was "wrong on many levels." She also said that the product treated an entire dish as flavour and that it gave the wrong impression of the dish to people who were not so familiar with desi food. Soon, Darjeeling Express - an Indian restaurant in London - also expressed their disapproval by tweeting, "This is so wrong at SO many levels- who are you paying to design your wraps @marksandspencer? You seriously need to rethink your "exotic" wrap selection. That is not Biryani-you do not appropriate names from a cuisine without even bothering to do any research on that dish."

This is so wrong at SO many levels- who are you paying to design your wraps @marksandspencer? You seriously need to rethink your “exotic” wrap selection. That is not Biryani-you do not appropriate names from a cuisine without even bothering to do any research on that dish. https://t.co/A9KPPaBL14

Promoted
Listen to the latest songs, only on JioSaavn.com
— Darjeeling Express (@Darjeelingldn) January 24, 2019

If this wasn't enough, the 'wrap' doesn't even have any rice in it, according to Gowardhan. Other twitter users also got in on the debate. One Twitter user said, "You wouldn't put a steak and kidney pie inside a wrap... so why biryani M&S?" "They haven't even tried to be clever & make a sort of burrito. Oh wow. I'd love to know who's in their food/marketing teams...?!", tweeted another. However, there were some people who didn't seem to have any problem with the food product at all. "Sounds gorgeous. I'm getting one tomorrow. You cannot restrict. What goes in a wrap/sandwich, that's the taste concoction," tweeted one user.

What are your reactions to Marks & Spencer's 'vegan biryani wrap'? Would you want to try it? Let us know in the comments section below!