7 Biryanis from South India You Shouldn't Miss, From Hyderabadi to Bhatkali, Beary and More!

Biryani is something that is loved by almost all the states; however, the taste differs as distinct techniques and spices are used to make it. South India boasts so many varieties of biryanis from the different states; believe it or not, each one has a different taste to offer 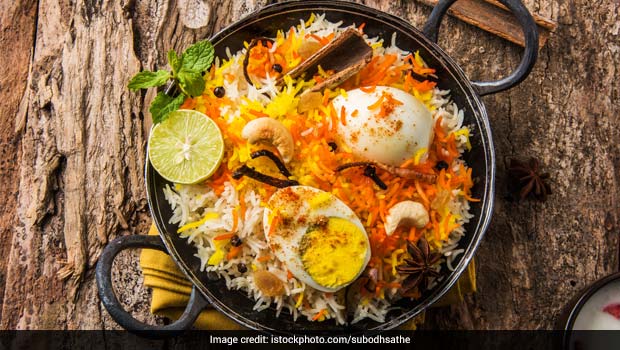 India is a country that boasts of innumerable flavourful cuisines from different regions. Every state has a peculiar taste and flavour to add to its delicacies, therefore, you wouldn't find a lot of similarities in the various cuisines. The usage of rice in our country needs no introduction; you can find different tempering of rice dishes as you move from one place to another. Biryani is something that is loved by almost all the states; however, the taste differs as distinct techniques and spices are used to make it. South India boasts so many varieties of biryanis from the different states; believe it or not, each one has a different taste to offer. Here are some biryanis from the South that you should try at least once in your lifetime -

If you are in Hyderabad and happen to miss out on the famous Hyderabadi Biryani, your trip will be incomplete. It is hands down one of the most aromatic and flavourful biryani you could ever ask for. The long rice is heavily layered with golden fried onions, chillies, fiery chicken and mint leaves. A bite into it will leave you asking for more.

Ambur is a small town in the Arcot region that was once ruled by Nawabs of Arcot in Tamil Nadu. It is known for its biryani with unique meaty flavours made with dried chilli paste and whole spices. The locals generally eat Brinjal Masala as an accompaniment. This dum mutton biryani includes curd and mint leaves, making it almost similar to its counterpart- Lucknowi Biryani.

This biryani makes a popular delicacy in the coastal regions of Karnataka. The rice and chicken are infused with spicy masalas giving it a distinct flavour. Unlike marinated chicken used in other biryanis, this dish does not need any marination or a base. Rather it contains generous amount of onions, tomatoes and spices. A delight for biryani lovers, this fiery dish is surely worth a try.

Dindigul is a city in Tamil Nadu and is popularly known for its Chola, Pandya and Vijaynagar settlements and for its delicious food, especially biryani. Dindigul Mutton Biryani is a mélange of spices that include star anise, cloves and mace powder that will surely leave you asking for more. South Indian biryanis are known for their slight sour taste that makes them stand out.

Beary Biryani or Manglorean-style biryani comes from the Muslim community in the coastal regions of Dakshin Kannada. Bearys (traders) are the people who live there. Beary Biryani has subtle flavours with the distinct aroma of fennel spreading through the grains. The dum biryani has spices that include nutmeg, mint leaves, fennel seeds, mace (javitri), poppy seeds, almonds, star anise and others. This biryani cooks slowly and tastes best on the next day of preparation.

Thalassery Biryani is also known as Kozhikode Biryani and the rice used in this biryani is slightly different from what is generally used. The rice used is thinner, short and a fragrant type from Kerala called Khyma or Jeerakasala. It is cooked with lots of ghee and a handful of spices to make it a lip-smacking treat.

Have you tasted all these biryanis from the Southern region of India? Do let us know how you liked them.