Stomach-churning foods from around the world 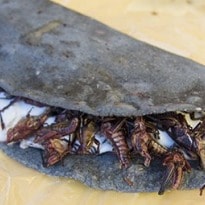 Fancy snacking on fertilised duck eggs, roasted grasshoppers and coffee made from defecated beans? We look at some global 'treats' that may make you feel queasy

Sometimes known as "cat-poo coffee", this so-called delicacy comes from beans that have been eaten and defecated by an Indonesian civet, a creature that looks like a cross between a mongoose and, if you squint, a cat. For some time, kopi luwak coffee was hyped as a hot new trend. The exotic "urgh" factor pushed prices up to £60 per cup and it was featured as a do-before-you-die experience in the 2007 film The Bucket List. "You're shitting me?" said an incredulous Jack Nicholson, causing Morgan Freeman to fall into hysterics on his death bed. However, no one was laughing when a recent BBC investigation uncovered the cruel treatment coffee-producing civets often receive. Harrods has since taken it off the shelves.

If watching your plate of food actively wriggle in front of you doesn't turn your stomach, then nothing will. In Korea, sannakji is a dish of live baby octopus (nakji). It's the residual nerve activity that keeps it moving and it is typically served drizzled with sesame oil. Eat it at your own risk: the active suction cups have been known to get stuck to the mouth or throat while swallowing, causing choking. The octopus's revenge?

Move over gourmet burgers and jam-jar cocktails, eating insects is the hot new trend, apparently - or so certain London restaurateurs would like us to believe. Wahaca, the Mexican street-food chain, put grasshoppers on the menu at its South Bank outlet earlier this year and, before long, we were getting helpful guides on where to eat insects all around the city. Naturally, this was shortly followed by an insect-only, pop-up supper club. In Mexico, grasshoppers, known as chapulines, are not just a passing fad. Served toasted with seasoning, they have long been popular in Oaxaca (pronounced Wahaca, hence the restaurant name).

Unless you have fantasies about participating in a bushtucker trial on I'm Celebrity... Get Me Out of Here!, give this dish a wide berth. These have nothing to do with those high-class delicacies found in shells at the bottom of the sea: they are plain-and-simple bulls' balls. Served with cocktail sauce and disguised with thick batter, the dish is often used for catching out unsuspecting tourists in Oklahoma and Texas. See also: "prairie oysters" in Canada.

If so much as a stray feather in your eggbox freaks you out, then this is not for you. Balut is a fertilised duck egg, between 14 and 21 days' old, and a popular street food in the Philippines. In August, two Filipino restaurants in New York joined forces for an all-you-can-eat buffet that's best avoided - their second balut-eating contest. This year's winner, with the dubious claim to fame, necked 27. Balut is also eaten in Vietnam and Cambodia.