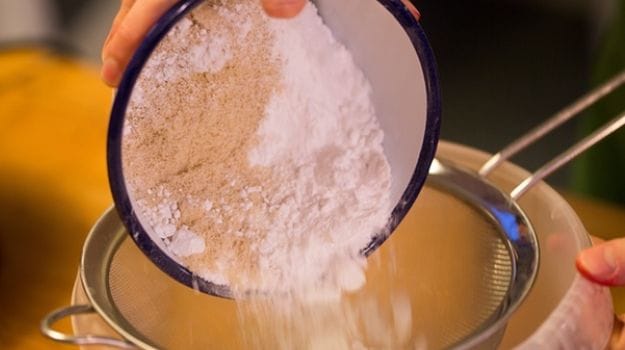 ‘It’s breaking down the royal icing,’ said Christine Flinn, a cake decorator from Cheshire. Photograph: Graeme Robertson for the Guardian

New formula provokes outrage, with cake decorators saying they will have to abandon product because introduction of maize starch is making icing ‘grainy’.

The sugar manufacturer Tate & Lyle has provoked outrage among high-end cake decorators by changing the recipe of its icing sugar, making it, experts say, almost impossible to use for intricate designs.

Bakers have called on the company to restore the original formula or risk losing sales.

The sugar scandal began when Tate & Lyle decided to stop using E341, also known as tricalcium phosphate, as an anti-caking agent " that is, to prevent the formation of lumps " and switch to maize starch instead.

Christine Flinn, a cake decorator from Cheshire, said she had been forced to abandon the product. "The butter icing becomes extremely grainy," she said. "It looks disgusting and so it's not something you'd want to give to customers. The glac"é icing has no gloss whatsoever. Maize starch contains fat, but fat and royal icing don't go together, so it's breaking down the royal icing."

I assumed it had been left out and got damp or something, it just would not sieve

The company said it switched from E341 to maize starch because it meant the sugar lasts longer.

Bakers complained on social media about the change when it was made in January, but despite being told that the company would reconsider its recipe, Tate& Lyle has now confirmed that the maize starch will stay. Writing on the British Sugarcraft Guild Facebook page, one user, Sam Harrison, wrote: "My buttercream is going to firm and gritty, not smooth and fluffy like normal."

Katherine Moloney complained: "I assumed it had been left out and got damp or something, it just would not sieve." Siyana Sibson added: "Buttercream feels gritty and tried to make it silky by adding more butter but even that didn't work! Will have to change the brand I'm afraid. Such a shame."

Jane Hatton, a bakery trainer and lecturer at the National Bakery School at London South Bank University, said the change in recipe would mostly affect professional bakers. "With royal icing " which is egg whites and icing sugar " you need your sugar to be as pure as possible because of the piping you're doing," she said. "The maize will give it a shortening effect, so it doesn't have the ability of doing the very fine work. It dries out."

Hatton added that home bakers should not be put off by the news. "It starts getting a bit confusing if you start telling the public: "Oh it's all gone wrong now, you can't use it.' Most people will be able to handle it for what they want at a domestic level.

"If at an industrial level we're doing 20 wedding cakes a week in royal icing, it's different " we would want our icing right and we'd give [suppliers] a specification for how we want our icing."

A spokesman for Tate & Lyle Sugars said that the original recipe would still be available to a small number of professional bakers.

"We continue to fulfil orders of icing sugar with E341 anti-caking agent to a small number of our manufacturing customers in circumstances where their compliance with ingredient labelling requirements would make a mid-contract ingredient change extremely difficult."

He added that the decision to use maize starch was taken after "both in-house and external testing showed that maize starch greatly reduces the possibility of caking when icing sugar has been stored in less than ideal conditions, and therefore improves the sugar's keeping qualities".

Tate & Lyle confirmed it had carried out additional tests after the new recipe was introduced and said that the results suggested that the product was of a higher quality.

"The results indicated no detrimental performance issues as a result of the change from TCP to maize starch." it said. "In fact the end user's experience should be optimised by the delivery of a more consistent and lump-free icing sugar."