The 'Central Perk' Cafe from Friends Exists for Real 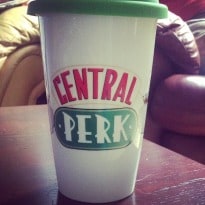 If you enjoyed watching Friends the first time as much as the tenth, then read on.

The same orange couch, the same vintage rustic interiors and the same red-bricked walls with unfinished edges. We're talking about Central Perk, the quirky cafe where Rachel, Ross and the rest of the Friends spent most of their time together.

After the show ended in 2004, Central Perk remained hidden in the Warner Brothers Studio. But now, it's very real and has opened its doors to millions of Friends fans from across the world. There are two in the United Kingdom, one in Liverpool and the other in Chester, and there's also one tucked away in a mall in Beijing, China.

If you find this hard to believe, have a look.

The Central Perk Café in Chester

The café has live performances which aren't as good as Phoebe's but very enjoyable!


A happy customer sitting on THAT couch
The resemblance is absolutely uncanny.


Smelly cat, smelly cat, what are they feeding you? A glimpse form the café in Beijing.


A cup of Tribbiani Mocha and 6 TVs playing Friends


Endless re-run of Friends with your actual friends by your side - now that's a killer combo!


Who wouldn't want to sit here all day?


Aaah, the perks of sitting at Central Perk.