The Chefs Who Photograph Their 'Artworks' for Posterity 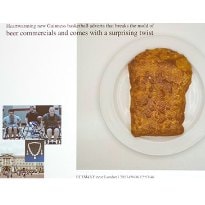 Chefs often see themselves as great artists - but their creations are destroyed almost as soon as they're created. Now an art project seeks to immortalise their work

Pity the chefs with artistic pretensions. Not least because their creations live just a few minutes, mostly on the end of a waiter's arm as the plate passes from kitchen to table. After that even the greatest dishes' lives end. They're unlikely to get any greater memorial than a happy snap and 140 characters on Twitter.

For some chefs, that is not enough. The Michelin-starred Julien Burlat of the Dome, in Antwerp, for example, who has devised a mini-photographic studio to sit at the "pass" - the birth-canal by which dishes leave a restaurant kitchen to make their brief way in the big world. There, the camera takes bird's eye views of his work for posterity and his database.

Burlat's gadget has been installed in a number of Belgian restaurants and it caught the eye of the grand old Flemish artist Jef Geys. His business is "superimposing economies of meaning that run counter-intuitively to the pervasive structures of the art world", an idea best illustrated by his 1971 proposal to blow up Antwerp's Royal Museum of Fine Art once it had finished hosting his show. Geys is also fascinated by people and food - one project involved nightly live TV broadcasts of different families in a Rotterdam housing complex eating their evening meal.

So for Geys's current show at London's Cubitt Gallery, on until mid-October, the mini-studio was installed in the kitchens of five very well-regarded restaurants in London and Kent. The restaurant staff were told they can use it as they like - which has resulted in more than a few obscene late-shift jokes. The results appear randomly on a webfeed (you can tell which restaurant is on show from a date/place caption) but with - and this is Geys's input - a news headline and image from the moment the picture was taken.

Watch and it becomes kind of gripping. Up comes a golden, glistening welsh rarebit at St John in Smithfield, plated and ready to go. Then a dirty dishcloth under "Greece trembles as violence spreads in the streets." I see a tattoed arm appear - it turns out that it belongs to Tom Sellers, of Bankside's Story. Then a gorgeous tarte tatin appears, as geometric as a mandala, then a pan full of thick, dark chocolatey sauce with the headline "China hit by earthquake."

Sellers, a 26-year-old who won his first Michelin star last month, says he signed up for the project because of the passion of the gallery staff. And he liked the idea that, for once, he would be in control of the pictures taken in his restaurant. "You should see the food paparazzi. Some people come in with cameras as big as the table; 95% of my customers take pictures of their plates, for Instagram and Twitter. You can't ban it. But it doesn't always do my food justice."

Sellers and his staff have used the mini-studio a lot since it was installed in August, and so do most of the restaurants. (St John has stopped, after the head chef decided the machine was too much of a distraction in his tiny kitchen.) At the Sportsman pub in Seasalter, a top foodie destination just outside Whitstable in Kent, chef/owner Stephen Harris collects photographs of raw ingredients he has foraged, as well as the plated stuff. For him, the gadget has become a diary.

Doesn't he worry that he is being mocked by Geys, who does, according to Cubitt Gallery's curator Jamie Stevens, like to "gently take the piss" over food's grip on modern culture? "I don't mind being the butt of the joke. I like art with a sense of humour." As we speak, a pan-full of some hideously burnt pork chops appears on the stream page, from The Sportsman's feed. The randomly generated headline? "David Beckham and Gordon Ramsay's London restaurant Union Street Cafe gets 2,500 bookings in two hours."

Photo: Welsh rarebit is on the menu at St John ? as captured in Jef Geys's art project. Photograph: Mark Blower