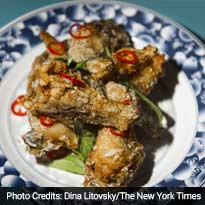 Chaz Brown has dreams. Strange ones - sort of like the dreams Kevin Spacey's character had in "American Beauty," except that instead of rose petals hovering in the air, Brown has visions of ethereal flocks of crispy chicken wings. "I've definitely seen wings flying out of people's heads," he said.

And why wouldn't he? Brown, a 32-year-old chef who trained under Georges Perrier at Le Bec-Fin in Philadelphia, works these days as the M.C. and mastermind behind Seoul Chicken, a New York City hangout where pound after pound of chicken wings come sizzling out of the kitchen every night. Sichuan peppercorn and sea salt wings. Palm sugar and kalamansi wings. Gochujang Buffalo wings. Fish sauce and garlic wings.

For years now, American chefs have learned to scoff at the word "fusion," a dated piece of nomenclature that calls to mind the watery mango salsas of the Benetton years. But the Asia-meets-Dixie menu at Seoul Chicken proves that fusion is alive and well, even if it has put on a clever new costume. For Brown, a humble, eight-buck plate of chicken wings can be the mannequin for an infinite number of cross-cultural wardrobe changes.

Brown is not merely the latest example of a toque who has chosen to apply high-toned technique to lowbrow food. He's at the forefront of a chicken-wing boom in New York and elsewhere, as a cheap bar snack evolves into a culinary obsession.

It's still pretty cheap, not only at chains like Buffalo Wild Wings, Bonchon and Atomic Wings, but also at smaller New York spots like Seoul Chicken and Ducks Eatery, Kappo Masa and the Bronx Beer Hall, Pok Pok Ny and Hanjan, Mighty Quinn's Barbeque and Mission Cantina, Alder and Ganso. At these idiosyncratic places, one sticky nibble makes it clear you're not in Buffalo, New York, anymore. Chefs are booking their wings on round-trip flights to Manila, Memphis, Tennessee, Mexico City and Bangkok - sometimes at the same restaurant.That's the case at International Wings Factory, a no-frills cubbyhole where the owner Deepak Ballaney's above-the-counter menu (packed with references to Hawaii, New Orleans, Thailand, France and other destinations) could be titled "Around the World in 80 Wings." Ballaney, who grew up in India and graduated from the Culinary Institute of America, has done brief stints in the kitchens at Eleven Madison Park and Bar Boulud.

"I wanted to open a fine dining restaurant," he said. "That was my thing." But when fine dining began to look financially unfeasible, if not downright insane, Ballaney took up another cause. He opened International Wings Factory a few days before Super Bowl Sunday in 2013. At that point, he did not fully anticipate or appreciate the symbiotic relationship between chicken wings and football. He sold about 9,000 wings that Sunday. He still remembers screaming at his kitchen team in a gleeful panic: "Fry! Fry! Just keep frying! Fry everything!"

Ballaney has since lost interest in opening a fine dining restaurant. Like him and Brown, many of the New York chefs with wings flying out of their heads have roots in the realm of mise en place and mignardises. Hugh Mangum, pitmaster for the expanding network of Mighty Quinn's Barbeque joints, used to work for Jean-Georges Vongerichten. Hooni Kim, who pays homage to wings both at Danji (fried) and Hanjan (grilled), originally emerged from the kitchens at Masa and Daniel.

"It's kind of like a test for a chef or a restaurant, to see what they do with a wing," said King Phojanakong, whose juicy, Filipino-inflected adobo version is a star attraction at Kuma Inn, an early adopter of small plates.

Gnawing on these new-wave wings is by no means a dainty experience, but if you pay close attention, you'll detect hints of each chef's education in flavor. At Mighty Quinn's, a pro-citrus, "high-acid perspective," which Mangum said he picked up from Vongerichten, translates into a lot of lime in the sauce that clings to the wings. At Seoul Chicken, Brown grows frustrated when customers neglect to douse the Seoul dry spice wings with the accompanying wedges of fruit.

"When the limes come back unsqueezed, I'm like, 'No, you didn't,'" he said. "The lime juice opens everything up." As with dumplings, sliders and popcorn, the finger-food appeal of chicken wings lies in their structural irresistibility: You see them, you want to pick them up. Restaurants are drawn to wings for the same simple reason their customers are: To order wings is to convert a meal into a potential bacchanal. Especially during football season.

"It's a communal food," said John Stage, the founder of Dinosaur Bar-B-Que, a chain of restaurants that serves an array of flavors, like hoisin sesame, garlic chipotle and "devil's duel." (The last arrives spicy enough to make your lips and gums feel sunburned.) "It's something you eat with your hands," Stage said. "You really associate chicken wings with a good time. Not too many people are eating chicken wings at funerals."

Although the Korean fondness for double-frying is much in vogue these days, chefs are quick to assure the home cook that chicken wings are easy to prepare and hard to mess up. Frying is optional. Sure, some restaurants smoke them, but that's optional, too. With wings, all you really need to do is soak or coat them in flavor, and apply heat.

At Hanjan, Kim favors an approach so rudimentary it's almost effortless: Marinate the wings for 20 or 25 minutes in soy sauce, mirin, sake and garlic, then drop them on the grill.
Phojanakong's adobo marinade at Kuma Inn is similarly unceremonious, and his braised-and-pan-fried wings can be whipped up by anyone with soy sauce, rice vinegar, garlic, black peppercorns and bay leaves, as well as some coconut milk to thicken the liquid. Just like that, a bar snack is transformed into a family meal.

Danny Bowien has detonated the entire original menu at Mission Cantina, his Mexican restaurant, but one stalwart from the debut remains: chicken wings, dusted with a "mole" made of powdered coffee and cocoa, then Jackson Pollock-ed with Abstract Expressionist splatters of crema, cotija cheese and Anson Mills benne seeds.

"That's the one thing on the menu that we have not changed since we opened," Bowien said. "On your menu you want to have something that you just know you're going to sell. And wings are always a hit."

Will Horowitz, a chef who is obsessed with smoking, fermenting and preserving food, absorbed that lesson when he and his sister, Julie, were bringing Ducks Eatery to the neighborhood in 2012. Days before they opened, Horowitz and his team realized that they didn't have enough menu items. Desperate for bar snacks, they dreamed up a recipe for wings - brined, smoked, shellacked in the deep fryer, and smothered with a peppery, fingertip-sticky Vietnamese-style caramel - more or less on the fly.

The wings were supposed to be a temporary place holder. "I don't think we ever meant to keep them on the menu - at all," Horowitz said. "But it got to the point where you couldn't take the things off."

He is conflicted about their popularity. "I almost hate having successful dishes," he said. "I don't like being locked into something. That being said, if I'm drinking and I'm having some of those wings, I'm probably going to be super-enthusiastic about it." And if he's lucky, the wings will start to levitate.

1. In a medium bowl, combine soy sauce, sake, mirin and garlic. Add wings and marinate for 25 minutes. Meanwhile, heat grill to medium.
2. Remove chicken from marinade and drain well. Place meaty halves of wings (the drumettes) on grill and cook, turning, for 4 minutes.
3. Add remaining halves of wings to grill and continue to cook, turning constantly, for 13 to 15 minutes (until wings reach an internal temperature of 160 degrees).
Yield: 4 servings

1. In a large saucepan, combine the vinegar, soy sauce, garlic, peppercorns and bay leaves. Add 1 1/4 cups water and mix well. Add the chicken wings and marinate at room temperature for 30 minutes.
2. Cover pan, place over high heat and bring to a boil. Reduce heat to low and simmer, covered, until tender, 30 to 40 minutes. Remove chicken from braising liquid and set aside on a rack to drain and dry.
3. In a large skillet, heat the oil, add the wings and fry until golden brown.
4. Return braising liquid to a boil. Add coconut milk and bring to a simmer. Add chicken wings, coat with sauce and serve.
Yield: 4 servings