The Pizza Revolution: the Staples From Naples 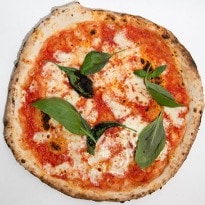 • Below, our testers try eight of the best pizzerias

There's a pizza revolution going on - and it doesn't involve pineapple or hotdog-stuffed crusts. Authentic, Neapolitan-style pizzas are winning over an army of British fans thanks to mini-chains such as Franco Manca and Rossopomodoro in London and Birmingham, independents PizzaFace in Brighton and La Favorita in Edinburgh, and street food crews Homeslice and Pizza Pilgrims, both of which have recently opened restaurants. (Pizza Pilgrims has also published a cookbook.)

Why does it matter? Because Naples is the spiritual home of the pizza. While Rome has its pizza al taglio (by the slice), Chicago its deep-dish, and every high street in Britain its Sloppy Giuseppe and American Hot, Naples gave the world what the Oxford Companion to Food terms "the archetype of modern pizzas".

The Associazione Verace Pizza Napoletana produces a mind-bendingly long and precise booklet about what constitutes an authentic Napoletana pizza, with edicts on acceptable toppings (sorry, no pineapple). But for British producers of Neapolitan-style pizzas, what matters are the quality ingredients and techniques: 00 flour, Italian tinned tomatoes (preferably San Marzano), fresh basil and firm fior di latte (mozzarella made from cow's milk) in the case of a classic margherita. The dough is left to rise slowly, then cooked for 60 to 90 seconds in a blisteringly hot wood-fired oven. The bases should be thin and softer in the middle of the circle, with a puffy cornicione (crust).

To many, all this marks a sea change from the chains. "When Francos [the forerunner of Franco Manca] opened in 1987, there was no one else doing authentic Neapolitan pizzas," says Sami Wasif, co-founder with Giuseppe Mascoli of Franco Manca and owner of Eco pizza. "It was all Pizza Hut and Pizzaland." Franco Manca developed a cult following for its delicious cornicione and sourdough bases, which Wasif says are "easily digestible" thanks to the dough's slow fermentation. "The big chains do things cheaper. They use big quantities of dry yeast plus other agents to accelerate the dough fermentation, and tend to buy cheap cheese," he says. Not that chain pizza is without its merits. "Cheese, dough, tomatoes and meat together is never bad," says Thom Elliot of Pizza Pilgrims, who says he has a "great place in my heart for Pizza Express".

But Pizza Pilgrims and Franco Manca hope to elevate what can be an average dish into a truly memorable one. Franco Manca leaves its sourdough to rise for at least 20 hours before baking it at 500C in a custom-built oven made by "artisans from Naples". Thom and James Elliot of Pizza Pilgrims earned their merit badges by taking a six-week road trip around Italy, meeting pizzaioli and collecting traditional recipes. "Neapolitan gets used to mean an indicator of quality rather than referring to a specific style," says Thom Elliot. In other words, unless there is a wood-fired oven on full blast behind the bakery counter, it isn't a Neapolitan-style pizza.

Those famous sourdough pizzas are still packing people in. Now a small chain, with five London branches, Franco Manca's original outlet in Brixton market is a shrine to pizza minimalism with its sparse decor and short menu. On our visit, the margherita was faultless - a rich and sweet tomato sauce, soft base, creamy mozzarella and that perfectly chewy crust. Katy Salter

It may do a Peking duck pizza, but purists will be pleasantly surprised by this small chain. Thanks to its wood-fired ovens and a dough recipe inherited from a Tuscan monk (it's a long story), its pizzas are a palpable cut above. Their elegantly thin, airy bases have real character, reassuring char and, if arguably they are a little crisp, plenty of fresh chew, too. Gusto's loosely pulped tomato sauce is unusually vibrant. Quality toppings seal the deal. Tony Naylor

This is a rigorously authentic, Neapolitan-owned pizzeria. Its wood-fired oven was imported from Italy, where they are built using clay from around Vesuvius which, experts insist, reflects heat in a specific way. Paper-thin in the middle and patched with char, Santa Maria's easily digested, springy bases are topped with A1 imported ingredients. Once you fold your slice of its buffalo mozzarella bufalina, it's like eating a sandwich of the sweetest tomatoes and double cream. Best pizza in London? Quite possibly. TN

There are now two outlets for the much-loved Leith Walk pizzeria, run by the Crollas, a Scots-Italian catering family who have been putting the Mediterranean into Edinburgh diets for nearly 100 years. Fresh dough is made daily instore from Italian flour, making proper Neapolitan-style thin-crust pizza. All the usual toppings, plus some novelties - radicchio, figs, baby spinach, parsley pesto, nduja sausage. Recommended: the seriously fiery Vesuvio, the voluptuous cinque formaggi (five cheeses), or the Ggiro d'Italia - a 14in "tour of Italy" with 10 hams and cheeses for £14.95. Alex Renton

"It is on the same level as my home town," exclaimed the man from, no kidding, Naples, who was sitting with his family at the next table in this tiny outpost in Tunbridge Wells. Owned by TV chef Rosemary Schrager's son Simon, La Fiamma dishes up pizzas with blistered bottoms and beautifully charred cornicione from its wood-fired oven. The namesake pizza comes topped with firm-ish mozzarella, shreds of wood-fired ham and salty olives. Delicious. KS

Croma is owned by a group of ex-Pizza Express employees. It started in Manchester and now has six branches, including a couple at Odeon cinemas. While the menu veers alarmingly into novelty territory (tandoori chicken pizza, anyone?), the simpler options are more than acceptable. The Cotto is covered in gooey mozzarella and firm, salty chunks of pancetta, on top of a sweet tomato sauce. While the base is pale and tastes a little doughy in places, there are good patches of char on the crust. KS

Pizza Pilgrims, London
12in pizzas from £7

Pizza Pilgrims feels like a neighbourhood joint somewhere in southern Italy - from the green-checked tablecloths to the all-important Neapolitan pizzas that made its name. So, do said pizzas live up to the hype? Resoundingly so. The Bufala is dotted with Buffalo mozzarella - creamy and slightly golden from the oven. The sauce, made simply from crushed San Marzanos, tastes like purest essence of tomato, and the chewy, charred crust contrasts nicely with the soft middle. KS

A serious slice on the seafront. GBP majors on local ingredients across a menu that, beyond the staples, features modish, creative toppings such as chorizo and chilli, and specials such as parma ham and nectarine. A simple margherita sings with flavour. The base is super-thin, wood-fired, crisply edged. The tomato sauce (a painstaking amalgam of cherry tomatoes, honey, lemon juice and slow-roasted garlic) is remarkably clean and strident. Ice-cream comes from Soho's God-like Gelupo. TN