The Sicilian Fish Made To Suit Your Style 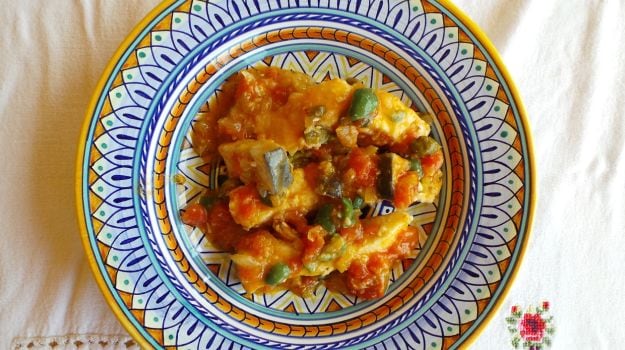 One of the most beautiful cities in Sicily is Syracuse, which has a history extending to the ancient Greeks. There is a method of cooking in Syracuse, especially applied to Sicilian fish, but other foods as well, that makes for beguiling dishes.

Stemperata is a Syracusean method of cooking that means something like "melting sauce" or "tempering sauce."

The idea behind "melting sauce" is to meld a number of aromatic ingredients together by cooking slowly until the sauce or food is infused with flavor. The dish is finished with a sprinkle of vinegar that evaporates, or "melts," into the sauce and it is the vinegar that gives the dish its distinctive flavor. Whenever you see a dish described as stemperata, you know it is a dish from Syracuse.

The concept of stemperata finds its roots in medieval cooking. According to the prevailing theory of dietetics at the time, prepared food had properties that would match the temperament of the person eating it.

In the mood for Sicilian fish

Certain foods were ideal for particular conditions or temperaments. The nature of foods could be changed by tempering the food with additions such as sauces or spicing.

In medieval Italian cookbooks one runs across the term temperare, which takes on a greater meaning than "to temper." It implies that one corrects the food so it will conform to a dietetic humoral notion. So the Italian stemperare has the sense of taking something away, and in this recipe it is the vinegar that "is taken away" through evaporation to moderate the taste of the sauce.This Sicilian fish dish is called pesce spada alla "stemperata" and it is typically made with swordfish, but two whole red snapper work well. The recipe, though, is written for swordfish.

1. In a large sauté pan or earthenware casserole, heat the olive oil over medium-high heat, then cook, stirring frequently, the onion and celery until softened, 5 to 6 minutes. (If using earthenware and if it is not flameproof, or if you don't know, you will need to use a heat diffuser. Earthenware heats up slower but retains its heat longer than non-earthenware casseroles. When using earthenware, food may cook slower at first and then cook very quickly while retaining its heat, so adjust accordingly). Reduce the heat to medium, add the capers, olives and tomatoes, and stir. Pour in the water, stir again, and cook until denser, 10 minutes.

Listen to the latest songs, only on JioSaavn.com
2. Dredge the swordfish slices in the flour, tapping off any excess flour. Set aside.