The invention of the chunky delicacy was a result of an accident by an American baker who ran out of baker's chocolate required to bake her chocolate cookies. 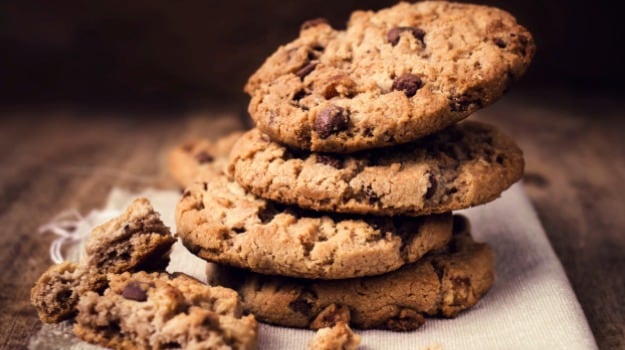 Highlights
Happy World Chocolate Day!The world is celebrating International Chocolate Day today.The day marks the introduction of chocolate on the European terrain in the 16th century. Ever since chocolate and its goodness has been discovered by human beings, innumerable inventions and innovations has come about around chocolate. While some came after days of experimentation and precision, some were  case of happy accidents.

Now who said accidents were all about mishaps. Especially, accidents that take place in kitchen can either turn out to be the biggest disaster or lay the founding stone of a whole new recipe. And one such path breaking recipe supposedly was that of our favourite chocolate chip cookie. Yes, you heard us. The invention of the chunky and chocolate-y delicacy was a result of an oh-so sweet accident by an American baker who ran out of baker's chocolate required to bake her usual batch of chocolate cookies.

It was around the year 1938 when baker Ruth Graves Wakefield supposedly invented a new chunkier variant to the old school chocolate cookies. The 1938 edition of the cookbook was the first to include the recipe "Toll House Chocolate Crunch Cookie" which rapidly became a favourite cookie recipe in American households.

A seasoned baker and a graduate from the Framingham State Normal School, Department of Household Arts in 1924, Wakefield worked as a dietitian until 1930 when she and her husband bought a tourist lodge in Whitman, Massachusetts and named it the Toll House Inn. There she cooked, served and overlooked all the meals served to the guests at the Inn, but it was for her sumptuous desserts that she gained recognition across the lodge guests and the countryside.

In one of those days, as she was baking cookies, she supposedly ran out of chocolate to bake her batch and substituted the ingredient with chopped chunks of a semi-sweet chocolate bar, hoping that it would melt and mix with the batter. But that did not happen, the chopped up pieces of the chocolate bar didn't melt entirely and only softened a bit, giving birth to the chocolate chip cookie.

As the Toll House chocolate chip cookie recipe became popular, sales of the semi-chocolate bar also increased, leading the brand to gift a life-time supply of the chocolate to Wakefield.

The recipe became a nationwide craze in the times of Great Depression and war;Photo Credit: I stock

The recipe grew even more widely popular in the time of The Great Depression that plagued the whole word in the 1930's. Crumbled under the greatest economic breakdown of all times, the not-so-expensive recipe of the chocolate chip cookie gave millions of people a respite. The recipe also proved to be a favourite among the soldiers on the front fighting the Second World War. During the war, soldiers who were stationed overseas would share their cookies with soldiers from other parts of the United States. The cookies became such a rage that soon soldiers were writing back to their wives and mothers to send them some cookies like the Toll House ones.

Wakefield was soon flooded with letters to share the recipe. There was a nationwide propaganda directed towards women, who were encouraged to bake the chunky delights for the soldiers fighting for their lives and country's pride on the front. Wakefield's bakery herself produced and packaged those cookies.

Few food historians refute the claim that the invention of chocolate chip cookie to be a case of an accident. The reason offered against the theory is the implausibility of Wakefield, the famed baker to run out of such essential ingredients as bakers' chocolate in her upscale lodge. They insist that the Toll House chocolate chip cookie was indeed a brainchild of Wakefield who wanted to give her costumers something different in chocolate, after being inspired by her butterscotch and nut cookie recipe, which was also quite popular amongst her costumers.

Whatever maybe the theory behind the invention of the much loved cookie, here we are almost a century later and can't stop munching on the chocolate-y goodness.