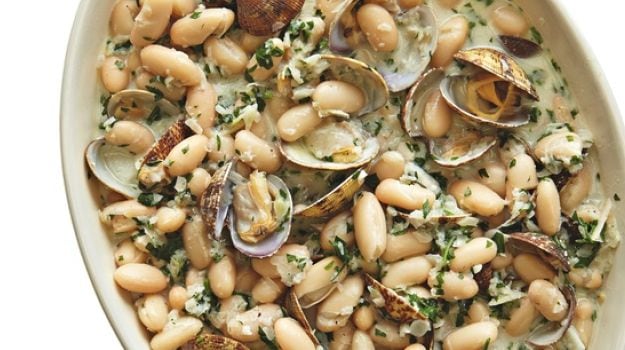 Clams with pasta is the go-to classic, but I prefer them with white beans. Plus why the addition of rye flour to chocolate cake mix is a real revelation

Although conventional wisdom dictates that it’s better to eat shellfish in winter, clams are a great early summer treat. Sunshine, a glass of chilled white wine and eating alfresco are great partners for their delicate flavour. And, while clams with linguine is the classic combo, I think I prefer them cooked the Spanish way, with soupy, creamy white beans, which absorb all those shellfishy juices even better than pasta. Cooking dried beans from scratch is a cinch: just get them going one evening while watching a TV box set, and they’re good to go (plus you don’t really need to soak them overnight, although it does reduce the cooking time dramatically, especially if your beans have been hanging around a while). You will get a far softer, smoother result than with tinned beans, though I do keep some of those in my larder for emergencies. Pair with new season’s garlic and you have the makings of a special weekend dish. Follow with a slice of the best chocolate cake ever and make it a weekend feast.

Clams and beans with summer garlic and vermouth

The world’s going crazy for vermouth right now, with so many new brands to try. The sweet-savoury, slightly unfathomable flavour goes brilliantly with clams and delicate summer garlic. Serves four.

If using dried beans, cover the beans with plenty of cold water and bring to a boil (if you’ve time to soak them for a few hours first, so much the better). Add a bay leaf, a few parsley branches, some peppercorns and a couple of cloves of the garlic, and simmer gently for a few hours, until tender. Season generously with salt, simmer for another 20 minutes, then remove from the heat.

Finely slice the remaining garlic. Meanwhile, heat the butter and three tablespoons of the oil in a large, heavy-bottomed pan and add the shallots. Cook over a medium heat until soft and translucent, then add the sliced garlic and season. Cook for a few minutes, until the garlic is soft, then pour in the vermouth, bring to simmering point and cook for five minutes, to reduce a little. Add the creme fraiche, beans and parsley, simmer for a few minutes and season to taste.

Put the remaining oil in a wide, deep pan and, when smoking hot, add the clams. Cover, shake and leave to cook for a minute, then add 200ml boiling water. Cover again, shake and cook for a few minutes, until the clams are beginning to open. As they do so, scoop them into the beans pot. Once all the clams have opened, tip the pan juices into the beans, stir in and heat through. Serve with good crusty bread and a glass of white wine.

Cinnamon, salt, vanilla… and chocolate. I thought I had the perfect recipe for the deadliest chocolate cake until I read Claire Ptak’s The Violet Bakery Cookbook, and discovered how well rye works in the mix. Chocolate and rye: who’d have thought it? Serves eight to 10.

Heat the oven to 180C/350F/gas mark 4. Lightly grease and line a 24cm cake tin. Melt the chocolate and butter in a large bowl over a pan of very gently simmering water (or in a microwave, stirring between blasts). When the chocolate is melted and velvety, take it off the heat.

In another bowl, whisk the flour with the salt and cinnamon. In the bowl of an electric mixer, beat the eggs, sugar and vanilla until light, fluffy and doubled in volume. Slowly pour in the melted chocolate, gently beat to combine and, once thoroughly mixed, stir in the flour mixture. As soon as it’s incorporated, pour the cake mix into the prepared tin and bake for 35-40 minutes.

For a gloriously gooey cake, it needs to be slightly wobbly in the middle but have the appearance of being cooked on top and around the edges; don’t worry if you take it too far, though – it’s a very forgiving and delicious cake. Leave to cool in the tin, but remove from the tin before fully cold and transfer to a wire rack to cool completely. Slice and serve with a dollop of softly whipped thick cream or creme fraiche.

And for the rest of the week…

Summer garlic makes the most delicious puree: for each person, pack a head in a baking dish, drizzle with olive oil, add some thyme and lemon peel, season well and roast for about 20 minutes in a hot oven. Give everyone slices of toast, a head each of roast garlic and some cream cheese or goat’s curd, and let each person squeeze out the puree from the cloves to spread on their toast; a simple watercress and shallot salad would be good alongside. Cooked white beans, meanwhile, are a gem to have ready in the fridge: puree and use to top bruschetta, or toss into rocket salads, or heat up with masses of olive oil, lemon juice and garlic to serve with bangers.

Hypothetically speaking, the chocolate cake will last for up to a week, but I doubt it’ll be around that long. Experiment with any excess rye flour – it has less gluten than conventional flour, and adds a lovely flavour to bread and the like .

• Thomasina Miers is co-owner of the Wahaca group of Mexican restaurants. Her latest book, Chilli Notes, is published by Hodder & Stoughton at £25. To order a copy for £20, go to bookshop.theguardian.com

Thomasina Miers’ clams and beans: If you like clams with pasta, you’ll love them Spanish-style with white beans. Photograph: Johanna Parkin for the Guardian. Food styling: Maud Eden