This One's Got legs: Are Insect Chocolates About to Take Off in France? 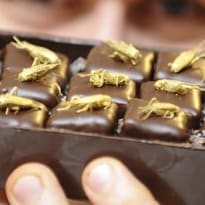 From the country that brought the world the culinary delights of snails in garlic, frogs' legs and pâté de foie gras comes another gastronomic first: cricket and worm chocolates.

Not to everyone's taste, admits the French chocolate-maker Sylvain Musquar, who suggests customers should avoid looking closely at the original handmade confectionary in pride of place in his patisserie shop in Nancy.

"You mustn't fix your eyes too much on them, or pay too much attention otherwise you won't eat them," Musquar said.

Even coated in edible gold dust, and even at a glance, there is no chance of mistaking the once-living decorations perched atop the chocolates.

Musquar, who uses a pair of tweezers to delicately place each insect or worm on the squares of chocolate "that shouldn't be too soft or too hard", says he came up with the idea while visiting Asia.

"There, eating insects is popular and part of the culture. I'm a chocolate maker, I thought why not mix the two," Musquar told France 3 television.

He admits the crickets and mealworms he uses need a little "make-up ... to make them a bit sexy" in the form of gold dust before being presented to the paying, consuming public.

"It makes them a bit more appetising and it covers the natural brown colour of the insects that might put people off," he added.

For unsqueamish patriots heeding the siren call of the Made-in-France campaign, there is good news: the chocolates are 100% national produce.

The insects and worms are supplied by MicroNutris, a Toulouse-based specialist company that formed in 2011. "We began producing insects after an United Nations report on food and agriculture suggested they might be the solution to hunger in the world," Cédric Auriol, the company's founder, told Le Monde.

The crickets are raised for eight weeks and the mealworms for 12 weeks, during which Auriol says they are fed a "diet rich in vitamins, minerals and saturated fatty acids".

Was this what the United Nations food and agriculture organisation had in mind when it suggested eating insects - or to give its proper name, entomophagy - might be a solution to global hunger?

Musquar believes mixing them with chocolate might just make the idea more palatable, and plenty of customers agree: he has already sold around 60 boxes of nine chocolates for €22 (£18.68) each.