This Popular Remedy for Whiter Teeth Might be Ineffective 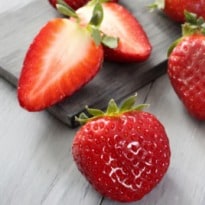 For long people across the world have sworn by the strawberry-baking soda mixture for whiter teeth. But a recent research conducted by Ran Kwon from the University of Iowa proves otherwise. It states that the mixture doesn't do much except from removing plaque from teeth.

The study was published in the journal Operative Dentistry and attempts at refuting the claims made by all other similar teeth whitening products that use a combination of fruit/fruit extracts with baking soda. Kwon found that the strawberry and baking soda formula produced no whitening, other than removing superficial debris.

"The only benefit of the do-it-yourself method (strawberries and baking soda) is while it seems to make your teeth look whiter, they look whiter because you're just removing plaque accumulation on your teeth," said Kwon.

"You really want something that penetrates into your teeth and breaks down the stain molecules. If you don't have that, you get just the superficial, and not the whitening from the inside, which was what you really want," said Kwon.

According to Kwon, not only do other methods get rid of what you've eaten but also provide a deeper and longer-lasting effect.

To arrive at these results, Kwon experimented with strawberries and baking soda. She rubbed a mixture of California-grown, organic strawberries and baking soda on 20 recently extracted teeth for five minutes, followed by a gentle brushing. The process was repeated three times over 10 days - much like the recommendations espoused by the pro-all natural teeth-whitening experts.

As a result, it was noticed that teeth brushed with the strawberry-baking soda mixture showed no real whitening, based on two well-known colour-measurement tests and evaluations with a spectrophotometer. On the other hand, three other groups of 20 extracted teeth were subjected to other teeth-whitening procedures - mimicking teeth whitening at a dentist, a prescribed tooth-whitening regimen and whitening strips bought over the counter. These procedures resulted into a much discernible whitening in the observational and instrumental
tests.

According to the American Dental Association, one of the primary reasons behind strawberries' inability to act as teeth whiteners is the lack of hydrogen peroxide and carbamide peroxide. Both the elements are the key ingredients in tooth-whitening products. Fruits like apples and lemons have also been popularly advocated as tooth whiteners, though they also have no hydrogen peroxide and carbamide peroxide, suggesting their effectiveness as tooth whiteners could be limited as well.

Promoted
Listen to the latest songs, only on JioSaavn.com
Inputs from PTI