This Will Make You Scream: World's Tallest Ice-Cream Cone 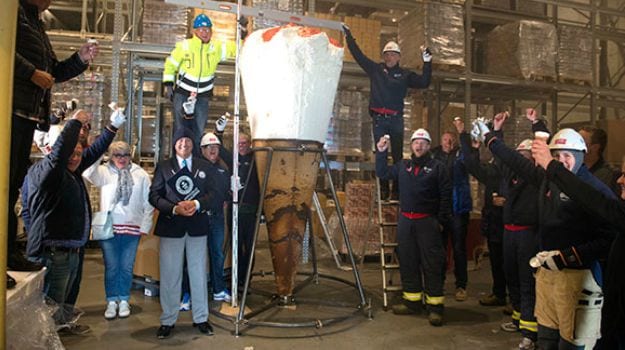 A Norwegian ice-cream company has scooped a Guinness World Records title after creating the world's tallest ice-cream cone ever with a whopping 3 metre high confectionary construction.

Norway's popular family-run ice-cream company Hennig-Olsen created the ice-cream cone that measured a whopping 3.08 metre tall, earlier this month. The giant cone weighed almost a tonne and was able to contain 1,080 litres of ice-cream - enough for 10,800 people to have two scoops each - as well as 60 litres of chocolate and 110 kg of waffle biscuit.

(How to Make Ice Cream at Home: An Easy, Foolproof Recipe)

Promoted
Listen to the latest songs, only on JioSaavn.com
The ice-cream had to be airlifted by a helicopter from the ice-cream factory where it was made, to an event in Kristiansand in Southern Norway where a Guinness World Records adjudicator was on hand to verify the attempt. The previous record of the tallest ice-cream cone was held since 2011 by a 2.81 metre tall ice-cream cone, made by Mirco Della Vecchia and Andrea Andrighetti (both Italy).