Turkish Coffee: What Makes The Aromatic Black Coffee A Treat For Winters

How do you like your coffee? Over the years the answer to this question has never been a constant for me, preferences changing from cappuccino to latte to espresso and Americano. 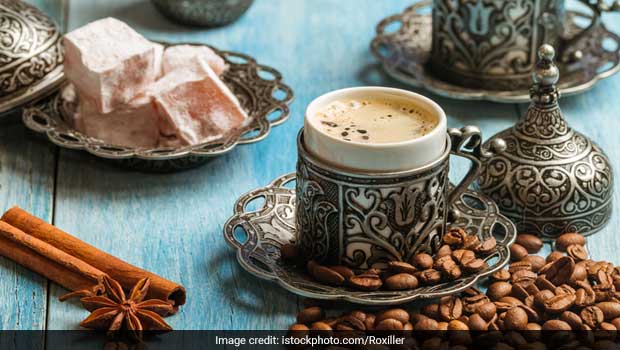 Highlights
How do you like your coffee? Over the years the answer to this question has never been a constant for me, preferences changing from cappuccino to latte to espresso and Americano. Of late, a type that's resurfaced as a hot favourite is the traditional Turkish coffee. I chanced upon it during my visit to a popular cafe in SDA market in New Delhi called The Brew Room, which offers a delightful range of artisan coffee. The Turkish coffee features in their specialty coffee selection, and is a thick, short and aromatic black coffee.

Traditionally known as kahwa in Arabi

Traditionally known as kahwa in Arabic (meaning 'strength'), the method of preparing Turkish coffee is said to be one of the oldest in history. Here roasted coffee beans are brewed along with warming spices, making it the perfect beverage to sip on in the chilly weather. The Turkish coffee culture is well-known, dating back to the late 1500, when coffee beans were presented to the Sultan, most probably sourcing the beans from Yemen, as per popular theories. So impressed were the royals and his courtsmen that it soon became a favourite beverage, in turn inspiring the royal cooks to come up with innovative ways to prepare coffee.

A tradition thus started, and the coffee culture spread among the masses of the Ottoman Empire, leading to various coffee houses mushrooming in the region. The Turks are also credited for introducing coffee beans to traders in Venice, which eventually led to the huge trend of Italian specialty coffee.

How to Prepare Turkish Coffee

The Turkish coffee is traditionally prepared using a special brewing pot known as cezve. It is a small brass vessel with a long handle, and some even have beautiful engravings on it. In the olden times, special coffee makers known as kahveci usta were employed by the upper class to prepare the best coffee to entertain guests. The whole process of making coffee was an event in itself. While the stringencies of that era may have toned down, the process of making the perfect cup of Turkish coffee is not easy to master.

Various coffee beans can be used, but roasted Arabica beans are commonly preferred, which are ground to a fine powder. In the cezve, water is added and placed on the fire to warm up. Ground coffee and sugar are tipped in and left to brew on low flame, while watching carefully to not let the liquor boil.

A good Turkish coffee is one which has a thick froth on top, and the more the froth, the better it is said to be. However, making a perfect cup needs a lot of attention. A thick froth can only be achieved by maintaining a temperature much lower than the boiling point of water and stirring the liquor frequently. If one is not careful, boiling the liquor would interrupt in the formation of the thick froth, causing it to evaporate.

Once the coffee froths up, half the quantity is poured in a cup and the cezve is put back on the flame to simmer for a few more minutes before topping the cup. What you finally get is a strong black coffee for an instant energy boost. Traditionally, the coffee was always served with Turkish sweets to offset the bitter notes. Today, people who can't handle the bitter notes, tend to add in sugar before drinking the beverage. Some also like to add warm spices like cinnamon and cardamom to spruce up the flavour of the black coffee.

Since Turkish coffee requires no filtration, wherein ground coffee beans are used directly to brew the beverage, after you drink it, you will find the remnants of the ground coffee in the cup forming all sorts of patterns. In the past, these patterns were interpreted by fortune tellers, leading to a form of art known as tasseography. Call it superstition, but many still believe in the practice.

The coffee culture spread among the masses of the Ottoman Empire

The number one rule for a good cup of coffee is, of course, sourcing best quality coffee beans. Experts will always tell you that the fresher the coffee beans, the better your coffee will be. Luckily, finding coffee beans or ground coffee is not difficult, thanks to the various gourmet stores and online shops. You only need to source a cezve to start brewing your own Turkish coffee at home. Like they say, practise makes one perfect, it's all about trying your hands at it.