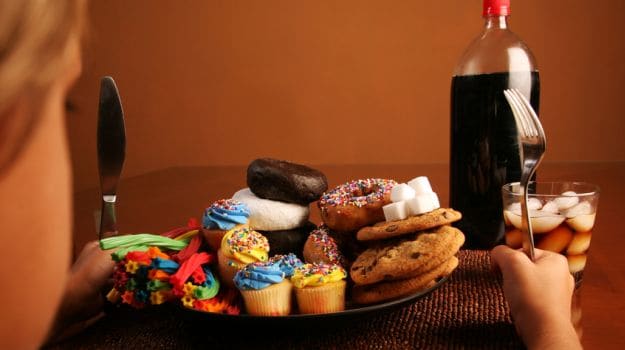 The vast majority of children and teens should have less than six teaspoons of added sugar in their diet each day, according to the American Heart Association.

Until age 2, children should consume no added sugars at all, and between ages 2 and 18 they should limit added sugars to 25 grams per day, the organization says.

"I think its become clear over time that heart health and prevention of cardiovascular disease starts in childhood," said Dr. Miriam Vos, lead author of a statement from the AHA published in the journal Circulation. "We've been gaining more information on sugar over time."

Currently, the average child in the U.S. gets 50 to 75 grams of added sugar per day, or about two to three times the recommended amount, Vos said.

According to the Harvard T.H. Chan School of Public Health in Boston, the average can of sugar-sweetened soda or fruit punch contains the equivalent of about 40 grams, or 10 teaspoons, of table sugar. Many common breakfast foods such as ready-to-eat breakfast cereals, cereal bars, instant oatmeal with added flavoring, and pastries also contain high amounts of added sugars, the school points out on its website.

Typical government and medical recommendations about sugar intake can be difficult for parents to understand since they are often suggested as portions of daily calories, said Vos, of Emory University and Children's Healthcare of Atlanta.

In the new recommendation, the group says toddlers to teens should stick to less than 25 grams of added sugar per day, which is equivalent to about six teaspoons of regular sugar. "The 25 grams is a safe amount for children between 2 and 18 (years)," said Vos. "We chose a single amount to keep it simple for parents."

For children under 2 years of age, the AHA says no amount of added sugar is acceptable.

"Children under the age of 2 are growing so rapidly (and) need so many nutrients that they don't have room in their diets for non-nutritious foods," said Vos.

According to Vos, the "total sugar content" shown on U.S. food labels is usually all added sugar, except in dairy and fruit items, which contain some natural sugars. In July 2018, the U.S. will start requiring food labels to specifically list the amount of added sugars.

Since children currently get more added sugar than recommended, Vos said the transition to a lower amount may be difficult for parents at first. "I think that having a specific amount to shoot for will help," she said. "It will help not only families, but people who take care of our children."