UK Farmers Warn of Pumpkin Crisis in Runup to Halloween 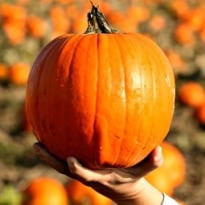 UK farmers and producers are warning there could be a shortage of pumpkins in the runup to Halloween, with hundreds of thousands rotting in the fields following the wet weather having to be pulped rather than heading for the supermarket.

Growers said this year has been the worst pumpkin season in a decade, citing Lincolnshire as the most affected area, where dwindling supplies would run out by the end of this week.

But supermarkets sought to play down suggestions of a shortage, saying that shoppers wanting to buy pumpkins ahead of Halloween next Friday would not be disappointed.

Halloween - imported from the US - is a major money-spinner for supermarkets and is the UK's second largest retail festival after Christmas. An estimated 10million pumpkins are grown in the UK every year - 95% will be carved into hollowed-out lanterns for Halloween and 5% will be used for soups, stews and pies. Demand from retailers has soared by 35% this year as the annual festival gets ever more popular.

Jim Meer, director of fruit and vegetable supplier Barfoots, said: "The 2014 season has been extremely challenging for the supply of pumpkins into the UK market. The recent weather has made harvesting conditions extremely difficult and with increased demand and lower yields it's a juggling act to ensure our retail customers are getting sufficient stock through to fulfil the demand in store."

He said his company was taking the unusual step at this stage in the season "of now ceasing supply to wholesale customers which will unfortunately cut off supply for the smaller independents. With the other suppliers in Lincolnshire facing worse issues we are doing what we can to cover the inevitable stock shortage in the lead up to the main Halloween celebration."

After good, sunny, growing conditions in August and September, the heavy rain of October has made pumpkin skins soft, he said, which means that with extra humidity they get soggy and collapse before they are harvested. On some farms JCB diggers are being used to remove the wasted crops.

One Lincolnshire-based farmer, who did not wish to be named, said: "It's the worst I've seen for a decade. It's a very short harvesting season of three to four weeks but it is a write-off for 2014. The weather has made it impossible to harvest the crop in the field and what is coming out is neither up to the appearance required by the retailer or the quality to last through until Halloween. Our forecast is very bleak and I cannot see supply lasting further than the weekend."

Waitrose said there might be supply problems in the north of England, despite a plentiful crop of giant and carving pumpkins following an increased level of rain and higher temperatures. A spokeswoman said: "As pumpkins continue to grow based on the volume of water they have access to, the giant pumpkins continue to absorb as much water as possible - this has resulted in a larger than normal percentage of pumpkins seeing levels of breakdown."

The picture was better in the south, she said: "Reports from our southern producers (based along the south coast, Southampton and the Isle of Wight) have seen a very different story to our northern growers in Lincolnshire. Our southern growers have enjoyed warmer weather earlier in the growing season - this inevitably results in smaller, green pumpkins turning orange before they have fully developed, this then creates an abundance of carving pumpkins available, rather than the giant pumpkins." Waitrose expects to sell 12% more carving pumpkins than last year.

Sainsbury's said it expects customers to buy almost 1.5 million pumpkins, with just over one million likely to be sold in the week running up to Halloween. To avoid pumpkins going unnecessarily into landfill, the company will be educating shoppers about disposal - including using local authority composting facilities or composting at home - while customers in 10 trial stores will be able to return their pumpkins to store to be composted by its waste partners Biffa.

In the south-west, Barry Loudhrey, director of Over Farm Market in Gloucester, said growing conditions had been good, and his farm expected to sell 12,000 pumpkins between Halloween and Christmas. "This year we have an abundance of large to extra large pumpkins as well as small ones. We find the interest generated at Halloween makes people more interested in cooking with pumpkin."

An estimated 10 million pumpkins are grown in the UK every year - 95% will be carved into lanterns for Halloween. Photograph: Chris Radburn/PA