Halloween Horror: Rat on a Stick 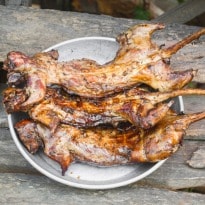 Promoted
Listen to the latest songs, only on JioSaavn.com
You'll have to excuse my squirmy face and quivering fingers as I type this out, making a few typos along the way as I nauseatingly look away from the screen. I had to grapple with the reality of 'Rat Kebab' being a real thing and people in Vietnam eating it like there's no tomorrow. (Shocking Things That People Eat Around the World)

The hot spot of it all is Cambodia, where each local farmer can catch about 25 kg of rats a night, the whole lot of which is exported to Vietnam. Over the years, the business has grown and is only set to get bigger as the taste of rat meat is spreading.

CommentsThe farmers only catch rice-field rats, which are considered a healthy delicacy due to their organic eating habits and free-range lifestyle. They nibble on rice stalks and vegetable crops, unlike their wild rat friends in urban cities, which are dirty and deemed unfit for consumption. (6 Terrifying Treats in the World)

So how do the farmers catch them? Do they roam around the fields in hopes of getting lucky? Far from it. Rat-catching season begins after the rice harvest in June and July, when rats have almost nothing to eat. Low food, coupled with seasonal rain, force them to go up to higher ground where farmers are ready for them with their rat traps.

A photo posted by Sarah