US Food Security Rejects Indian Snacks: Deem Most of Them Unfit for Consumption 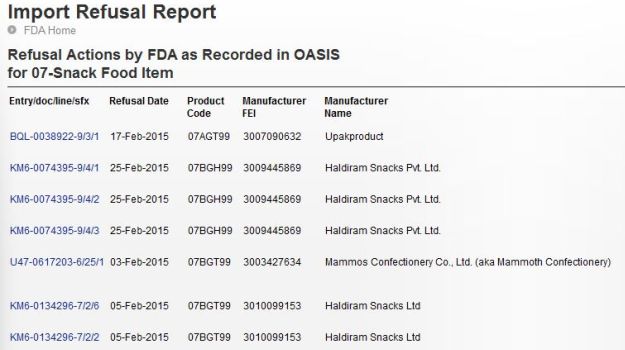 Adding another chapter in the ongoing controversy around Indian fast food manufacturing brands is a recent report published in The Wall Street Journal, which will definitely shock you, to say the least. It mentions that out of 217 imported baked products rejected by the U.S. FDA so far this year, more than half were made in India and included brands such as Haldiram’s and Britannia.

If you visit the U.S Food and Drug Administration website, you will get to know that Indian snacks and other eatables have been rejected multiple times by the U.S food security authorities. The U.S FDA had issued an extremely transparent and accessible list of its import refusals dating back to the year 2001. We went through last year’s report and saw that Haldiram’s snacks were rejected on 19th September on the grounds that it contained pesticides.

This was not it, the violations kept on increasing with every passing month. In December 2014, twenty one product shipments were refused by the US food inspectors under snacks category out of which 17 were Haldiram’s products. The charge statement said that the product/s “appears to be adulterated because it contains a pesticide chemical.”(Haldiram's Revenue More Than McDonald's and Domino's Combined!)

Unfortunately it was not only snacks and the like that were rejected by the U.S FDA. Indian products that didn’t meet the U.S standards of imports ranged from food items to drugs and cosmetics and they were rejected on the grounds of contamination, labeling, packaging, alleged bacterial infestation and what not.

Controversy Over 'Unsafe' Food Samples from Popular Restaurants in Delhi)

The U.S FDA also rejected a batch of Britannia biscuits on Januray 6th stating that “the article appears to be misbranded in that the label or labeling fails to bear the required nutrition information.” Bikaji, Bikanerwala and Desai Brothers were also spotted in the import refusal report on the grounds of the article consisting “in whole or in part of a filthy, putrid, or decomposed substance or be otherwise unfit for food. “

Listen to the latest songs, only on JioSaavn.com
Once the above was unveiled and dragged into the limelight a couple of brands held their stance and defended themselves. As reported by The Wall Street Journal, Mr. A.K Tyagi, a Senior Vice-President at Haldiram’s claimed that the company’s products are “100% safe and comply with the law of the land.” He added that the discrepancies are nothing but an outcome of the variations in the food standards that differ in Indian and in the U.S.

CommentsBritannia stated in an email, “Britannia exports to the U.S. only out of U.S. FDA registered factories in India and meets product/labeling standards. These may be instances of shipments made by independent exporters based out of India.”