Varun Dhawan's Sunday Cheat Meal Was Made By His Body Guard!

ABCD 3 actor Varun Dhawan is a fan of clean eating. But it looks like even he couldn't help but indulge in the biryani cooked by his body guard! 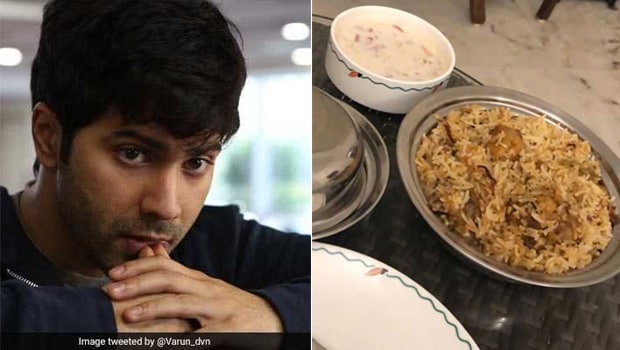 Highlights
Promoted
Listen to the latest songs, only on JioSaavn.com
Bollywood actor Varun Dhawan is quite busy these days, with lots of projects in his kitty. One of his films that his fans are eagerly awaiting is Sui Dhaga, which also stars Anushka Sharma. Another one of his upcoming flicks includes dance-based movie ABCD 3, which will also reportedly star Katrina Kaif, Salman Khan and Jacqueline Fernandes. The actor, who has multiple super hits like Badrinath Ki Dulhania, Judwaa 2 and Main Teraa Hero to his credit, is a fan of clean and healthy eating.

But hey, everyone is allowed their cheat days, right? Varun is often snapped eating yummy dishes like pizzas, cheesecakes and noodles. In fact, his rapper friend Badshah had once revealed in an interview that Varun Dhawan is quite a foodie and also prone to eating 'mindlessly'. However, Varun's trainer had told us that he follows a strict workout regime and does a mix of Pilates and weight training to stay in shape. Also Read: Varun Dhawan's Workout Routine and Diet: Fitness Tips Straight from His Trainer

But it looks like Varun Dhawan had a cheat day this Sunday and guessing from what he posted on his Instagram stories, it was an indulgent one too. Have a look!

That biryani, which Varun says was cooked by his body guard, looks simply delicious! It looks like Varun Dhawan's body guard has got some serious cooking skills. Varun has been a fitness icon right from his first film Student Of The Year and with time, his image as the 'fit and fab' actor has only grown. His lean body is the result of his strict diet regime which includes low calorie, high protein meals. Varun has a good metabolism and eats every two hours to keep his energy levels up. He starts his day with an omelette, a bowl of oats and a whole-wheat sandwich.

For lunch, all Varun has is brown rice, three chapatis with broccoli and baked chicken. Whereas, for dinner he eats a mix of greens and grilled fish. Varun Dhawan also believes in light and healthy snacking and eats lotus seeds, papaya or banana or drinks a protein smoothie as a mid-meal energizer. Well, we hope you get more chances like this one, to break away from your monotonous diet, Varun!