Watch: When The 'Jabariya Jodi' Sidharth And Parineeti Had 'Fire In Their Belly'!

Jabariya Jodi stars Sidharth Malhotra and Parineeti Chopra were seen unleashing their foodie side in the capital recently while promoting the upcoming movie. 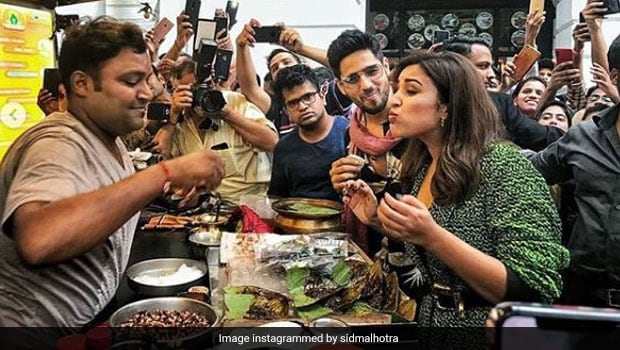 Delhi serves up a surprising cornucopia of culture, commerce, history, street life, and food to keep everyone thoroughly engaged. But if we talk about just food, the capital boasts of some amazing and unique food options that throng across the city. From piping hot chole bhature and steaming dim sums to the chatpata street food like gol gappa, aloo chaat and tikki, there is nothing that would not get your taste buds hooked to the city's culinary fare. And, it seems our Bollywood celebrities are no exception.

For the promotion of their upcoming movie 'Jabariya Jodi', actors Sidharth Malhotra and Parineeti Chopra were spotted in Delhi, bringing their colourful characters from the reel to real, by trying the popular 'Fire Paan' in the heart of Delhi, Connaught Place. Dressed in his 'reel' character, Sidharth posted a few pictures and a video on Instagram, where he is seen to be enjoying 'Fire' paan with the co-star Parineeti, who looks a bit apprehensive in trying the paan. 'Khaike paan Jabariya wala', he captioned the posts. The actors were in town to promote the movie and were surrounded by fans, who were visibly surprised and excited to see the two stars trying the flaming paan from the very old and famous shop 'Odeon Gupta Paan Palace'.

Parineeti Chopra also posted a video on Instagram, giving a shout out to the paan, asking Sidharth how he liked the experience to which he describes as 'flaming' and that he literally had 'fire in the belly' in a true Bihari dialect that he has adopted for the role of a Bihari thug in the movie. Besides being seemingly fit otherwise, both the actors are self-confessed foodie. Sid in an interview to Indian Express thinks Delhi is the ultimate food city, while Parineeti's foodie side can often be seen on her social media handles.

'Jabariya Jodi' is Sidharth and Parineeti's second movie together after the romantic comedy 'Hasee To Phasee'. It is a movie about pakadwa vivah (groom kidnapping) that is rampant in the state of Bihar. The movie is entirely shot in Lucknow and has been making much noise due to the concept that throws light on a serious problem that traps the state of Bihar, where bachelors are forcefully married, often at gunpoint. The movie is slated to release on 2nd August.

Here's wishing the stars as flaming success for the movie as the 'Fire Paan'!