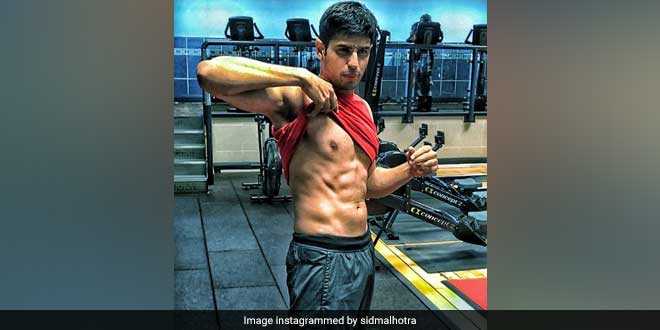 Bollywood actor Sidharth Malhotra is celebrating his 34th birthday today. The actor, who made his place in everybody's hearts with his romantic performances in 'Student of The Year' and 'Ek Villian,' has always sported super fit body in his movies. Sidharth Malhotra kick-started his birthday by cutting a decadent-looking chocolate cake with the media, as well as his industry friends and colleagues. The pictures from Sidharth Malhotra's late night birthday bash have been doing the rounds on social media. Fans have also been sending the actor their wishes by making #HappyBirthdaySidharthMalhotra trend on Twitter and Instagram. Malhotra, who has 7.6 million followers on Instagram, will be seen in two films in 2019- 'Jabariya Jodi' opposite Parineeti Chopra and 'Marjaavan' with Rakul Preet Singh, Riteish Deshmukh and Tara Sutaria.

Sidharth Malhotra is known to be quite the fitness freak. One doesn't just end up looking as fit and fabulous as Malhotra does without doing anything, after all. One look at his Instagram page will show you how much the actor likes to exercise and engage in outdoor and physical activities. His fitness regime includes a number of different types of workouts, including running, dancing, martial arts, rope climbing, playing basketball and even yoga.

Take a look at Sidharth Malhotra's display of his impressive core strength:

But the actor is also equally committed to following a healthy diet. In fact in an interview with GQ, the actor gave a detailed sketch of the rules and beliefs that he stuck to, when it came to maintaining a fit body and staying healthy.

Here are some healthy diet lessons from the spunky birthday boy Sidharth Malhotra:

1. Know your body: Sidharth Malhotra revealed in the GQ interview that he believed in sticking to a diet plan that works for his own body, instead of following a pre-set diet plan. He said that according to his blood type, he was advised to stay away from certain foods, including dairy and wheat and 'embrace a high-protein diet.'

3. Cooked vegetables over raw: Sidharth Malhotra says that one should eat cooked vegetables, rather than consume them raw. This is because not only is cooking more hygienic, it is also a way to ensure that bioactive compounds in the veggies are more easily available to the body for quicker absorption.

4. Eat sweets in a smart way: Delhi boy Sidharth Malhotra told GQ that he is a fan of sweets, especially the hot chocolate fudge from Nirula's. However, to keep himself healthy, he learnt to like jaggery, which he said was healthier and kept his sugar cravings under control. He also said that he only eats chocolate, which has 70 percent cocoa.

Sidharth Malhotra is in great shape as he has been working out since the age of 18, so even if he slips up occasionally, he probably doesn't have much to worry about. But for anyone out there looking to emulate the actor's looks and fitness, Sidharth Malhotra's wholesome diet is a big lesson.