What a Dish! UK's Most Beautiful Plates of Food 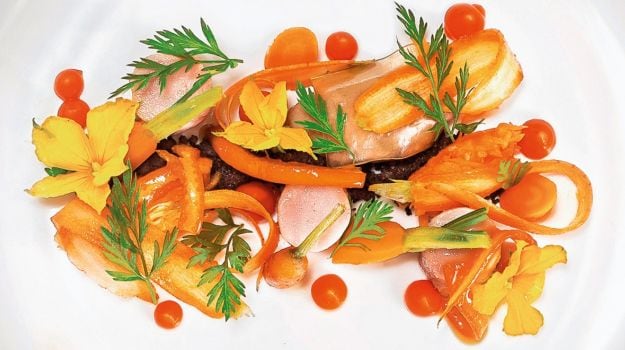 Rabbit, marmalade, carrot, soil at Van Zeller, Harrogate: how dishes look is now right up there with flavours and ingredients. Photograph: Rebecca Lupton for the Guardian.

Restaurant plates have never looked more lovely. But do they have to be so complicated? The Guardian’s restaurant critic considers five modern masterpieces, from the Ledbury and Sat Bains, to Hedone and the Sportsman.

It was Noma that started it. When Copenhagen’s two Michelin star restaurant first launched its now legendary signature dish – vintage carrots with camomile – in the Noughties, a generation of chefs gasped in awe and reached for their tweezers. Suddenly, vegetables everywhere were to be lightly pickled and teased into decorative little tubes of myriad colours, tottering down a specially designed plate in a wave of exquisiteness.

But they were still just vegetables, right? Did the intricate and painstaking presentation make them taste any better? Apparently so: a research team at Oxford University found last year that a salad plated up to resemble a Kandinsky painting was judged by human guinea pigs to be more delicious than exactly the same ingredients delivered any old how. Beauty, as ever, matters.

If almost every high-end restaurant in the world is to be believed, how their dishes look is right up there with flavours and ingredients. Gone are the 1990s, when food came in vertiginous towers that required servers to have the balancing skills of a circus act. Today, a dish’s components must appear to have been insouciantly strewn by Tinker Bell in a bewitching melee of dots and splodges and tiny, edible flowers.

It’s no coincidence that the practitioners of high culinary art tend to be fans of vegetables (and foraged produce from fields and hedgerows). A vast chunk of charred meat might get the juices going, but it’s unlikely to win any beauty contests. So in Paris, Alain Passard “strangles” charred baby onions with a little tangle of twine, or twists leaves of mandolined courgettes into the shape of blowsy roses and plays with colour like an artist: blue potatoes and purple carrots. One of the most visually striking cookery books of recent times is Vegetronic, by Alexis Gauthier, whose acid-drenched colours frame dishes of painterly loveliness. And the Ethicurean in Bristol, whose ingredients frequently come from its ancient walled garden, will tile a plate with almost translucent slices of different-coloured beetroots until it looks “like a stained-glass window”.

Diana Henry is the author of another book rammed with pupil-dilating, photogenic food: Change Of Appetite (I can’t stop perving over her perfect, limpid poached white peach with rose jelly). I ask her why the appearance of what she eats is important. She is adamant: “I honestly think that if a plate of food looks good, it can taste better.” Eating isn’t simply about taste. Cliches are cliches for a reason, hence “you eat with your eyes”.

Anyone who’s ever wandered in a mesmerised trance around Tokyo’s dazzling depachikas – the football pitch-sized food halls underneath department stores – can’t fail to realise how important the visuals of food are to the Japanese, from jewel box-like bento to a single, perfect melon wrapped in tissue paper and presented in a gilded box. The Japanese fetish for beauty in food – which covers everything from crockery to glassware to the correct use of negative space – even has a name: moritsuke. Food slants like a cedar tree (sugimori) or is high like a mountain (takamori). Their kaiseki-ryori (haute cuisine raised to an art form) is about presentation every bit as much as the unimpeachable quality of the ingredients: nothing is ever left to chance. And culinarily, where Japan leads, the world follows.

If a plate of food looks good, it can taste better

I wonder what an artist might make of it. Apart from musing on something that occurs to a lot of us when presented with the over-elaborate dish (“Someone’s been fingering that for quite a while”), Grayson Perry has a typically perceptive take: “Square plates – especially rough-hewn glass ones – seem to be an unofficial warning that the food is likely to be all show and no taste. I’m also averse to smears on the porcelain.” He makes me howl with laughter at a current gastropub trope: “I went to one place where the chips were served in a little galvanised pail, but went off the idea when I discovered their urinals were made from larger galvanised pails.” This is an unfortunate side-effect of the restaurateur failing to think his moritsuke through.

I can only nod in enthusiastic agreement when Henry says, “I have a belief that the small things in life are very important. If we don’t get pleasure from the small things, the rather ordinary things, then we’re stuffed. Caring about making your food look lovely is part of that. Cumulatively, it makes you happier, however mad that sounds.” An independent observer of the Oxford experiment came to the conclusion that, yes, expectations were raised by the artistry on the plates and that, crucially, this meant people were prepared to pay more for beautiful food. They seemed a little perplexed by the discovery. How daft: of course we prize beauty. I just wouldn’t try this at home.