Why Red Peppers are Good for You 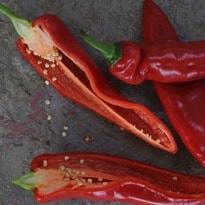 Look for the elongated rather than bell-shaped varieties for a fuller flavour as well as a health boost.

In theory, there's no vegetable better than the red pepper for bringing Mediterranean sunshine to a dish, but the majority of red peppers on sale in Britain are the thick-skinned glasshouse-grown "bell" variety. A combination of growing method and variety means they are full of water. So roast or grill them to drive it off and concentrate their sweetness; try not to add any more liquid ingredients. If you have the time, leave red peppers at room temperature for a day or two to dry out and darken in colour; this improves them.

More elongated, thinner-skinned romano/ramiro variety peppers have a shade more of the taste profile you get in chillies, but without the piquant heat. They are the closest in flavour you'll get to those voluptuous, curvy red peppers on sale in southern European and Middle Eastern markets.

Why are peppers good for me?
Red peppers are one of the best sources of the red-coloured carotenoid pigment, lycopene. Some studies suggest that eating lycopene-containing foods could lower the risk of prostate, pancreatic and cervical cancers. They are also ideal for topping up your store of two other carotenoids, lutein and zeaxanthin, which are naturally found in the retina. Some research suggests that eating foods rich in these pigments can help prevent macular degeneration, a condition that can impair the vision of older people.

Red peppers have notable levels of pyridoxine (vitamin B6), which plays an important role in brain function, plus antioxidant vitamins C and A.

Where to buy and what to pay
Peppers are usually better value bought loose. Guide price per kg: £4.95 (bell) £9.95 (romano/ramiro).

Joanna Blythman is the author of What To Eat (Fourth Estate, £9.99). To order a copy for £7.99 with free UK p&p, go to guardianbookshop.co.uk

Peppers and tomatoes are abundant at this time of year - this dish is really great alongside barbecued meat or as part of a mezze.

1 Preheat the oven to 150C/300F/gas mark 2. Place the peppers cavity side-up in a roasting tray. Drizzle with half the oil, season and place in the oven.

2 Brown the aubergine in the remaining oil over a medium heat. Remove to a plate with a slotted spoon. Turn the heat down, then add the onions and butter. Soften gently for five minutes.

3 Blend the tomatoes, garlic and ginger until smooth.

4 Add the spices to the onion, toast for a minute then add the chickpeas. Toss around, adding the aubergines after a couple of minutes. Pour in the tomato mixture, simmer, then add lemon juice and coriander. Spoon into the peppers and return to the oven until soft.

5 Serve with rice or flatbreads and yoghurt mixed with mint.