Your Brain is to Blame for Late-Night Snacking: Study 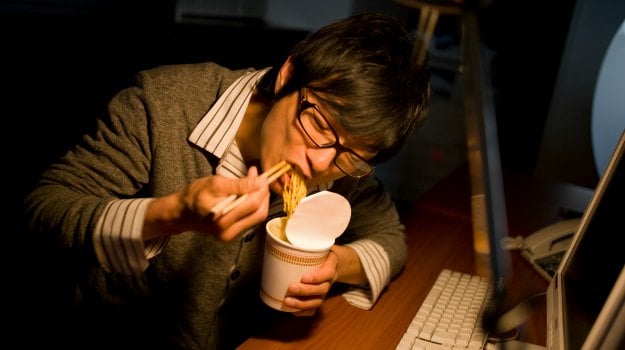 Late-night snacking is your worst enemy. To start with, at night your metabolism is at its slowest so food does not digest as quickly or as efficiently as it should. So if you tend to eat a lot at night, especially food that is high in sugar, salt or fat, then it's bound to add to your weight. Secondly, whatever it is you munch on late at night, doesn't make you feel full. This is probably why you end up eating far more than you should.

According to a new study published in the Journal 'Brain Imaging and Behavior', if you eat the same food during the day it will most definitely fill you up. However, the same food eaten at night won't. Researchers at Birmingham Young University in the Unite States worked hard to find that late at night, your brain does not get the same 'food high' that it does in the evening.

Travis Masterson, lead author from Brigham Young University said, "You might over-consume at night because food is not as rewarding, at least visually, at that time of the day. It may not be as satisfying to eat at night so you eat more to try to get satisfied."

All about the study: A group of researchers, both sciences professors and neuroscientists used Magnetic resonance imaging (MRI) to understand how a person's brain responded to high calorie and low calorie food images during different times of the day. The study found that high-calorie food images can generate spikes in brain activity, but the neural responses to the same image are lower later in the evening. So the same kind of food might not seem as rewarding later on in the night, causing you to eat more of it.

All participants of the study viewed 360 images during separate sessions that were held one week apart, one during morning hours of the day and the other was late in the evening. Participants looked at images of both low-calorie and high-calorie food, where researchers found a higher response to high-calorie food.

According to Lance Davidson, co-author and professor of exercise sciences, "We thought the responses would be greater at night because we tend to over-consume later in the day. But just to know that the brain responds differently at different times of day could have implications for eating."

The researchers also found that the participants were subjectively more preoccupied with food at night even though their hunger and "fullness" levels were similar to other times of the day.

So if you feel that no matter what and how much of something you eat at night, if you don't feel full then it's not the food which is at fault, it's probably the way you think.

With inputs from IANS & PTI